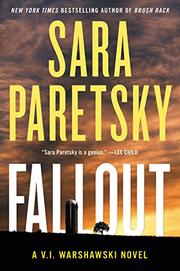 Think V.I. Warshawski butts too many heads in Chicago? Wait till you see what happens when she and her dog, Peppy, leave the big city for the wide-open spaces of Kansas.

Angela Creedy, a hockey teammate of Bernadine Fouchard, whom Warshawki rescued last time out (Brush Back, 2015), is worried because her cousin, film student August Veriden, is accused of ransacking the Six-Points Gym, where he works as a personal trainer, and is nowhere to be found by police officers who want to ask him all about drugs. Reluctantly agreeing to look for him, Warshawski follows his trail to Lawrence, Kansas, in the company of Emmy-winning actress Emerald Ferring, who evidently believed in August so completely that she persuaded him to help her look into a hidden chapter in her past. Preliminary inquiries in Kansas link the 1983 death of Emerald’s mother, Lucinda, to an anti-nuclear protest she’d taken a vociferous role in only six weeks before. Crazy, homeless Sonia Kiel replies to one of Warshawski’s circulars seeking information about the missing pair by phoning to say that she’d seen them dancing on her true love’s grave. But by the time Warshawski shows up to meet her, she’s lying unconscious in a nearby stairwell along with student Naomi Wissenhurst. The attempt to follow up her information is thwarted by the insistence of Sonia’s parents, retired KU professor Nathan Kiel and his wife, Shirley, that Sonia’s ravings can’t be trusted and that the true love from all those years ago, grad student Matt Chastain, isn’t buried nearby and probably isn’t even dead. Even after Warshawski’s determined that the 1983 demonstration continues to have calamitous aftershocks more than 30 years later, she’s still helpless to stop a continuing series of deaths not so much mysterious as uncanny.

A steadily deepening historical nightmare that ends up implicating pretty much everyone in sight in a multilayered coverup. Whodunit purists may be frustrated at the absence of a single villain to blame, but Paretsky’s legion of fans will rejoice in her heroically scaled 20th novel.

Sara Paretsky
author of BRUSH BACK

No one would accuse V. I. Warshawski of backing down from a fight, but there are a few she’d be happy to avoid. High on that list is tangling with Chicago political bosses. Yet that’s precisely what she ends up doing when she responds to Frank Guzzo’s plea for help in Brush Back, the latest thriller from bestselling author Sara Paretsky. For six stormy weeks back in high school, V.I. thought she was in love with Frank. He broke up with her, she went off to college, he started driving trucks for Bagby Haulage. She forgot about him until the day his mother was convicted of bludgeoning his kid sister, Annie, to death. Stella Guzzo was an angry, uncooperative prisoner and did a full 25 years for her daughter’s murder. Newly released from prison, Stella is looking for exoneration, so Frank asks V.I. for help. “Paretsky, who plots more conscientiously than anyone else in the field, digs deep, then deeper, into past and present until all is revealed,” our reviewer writes. View video >

BRUSH BACK
by Sara Paretsky
Mystery

COMING BACK
by Marcia Muller
Mystery