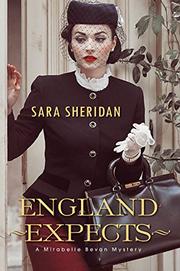 A former secret service agent is a magnet for murder in 1950s Brighton.

Although Mirabelle Bevan’s duties as an associate at a debt-recovery service seem humdrum, she’s constantly drawn to cases involving murder (London Calling, 2017). So she’s intrigued when sportswriter Joey Gillingham, who’s come up from London for a boxing match, gets his throat cut in a local barbershop. The police clear the crime scene suspiciously fast, and Mirabelle’s associate, ex-cop Bill Turpin, suggests that since almost the entire force are Freemasons, they may be covering up some secret related to the Masons. Ever curious, Mirabelle and her pal, secretary/sleuth Vesta Churchill, talk their way into the local Masonic Temple, where they witness the painful poisoning death of the cleaning lady, Mrs. Chapman. Although neither murder seems to have anything to offer Mirabelle, the firm is soon hired by Joey’s sister, who claims that his coded notebook with racing tips and winning betting slips has vanished. The only police officer Mirabelle trusts is DS Alan McGregor, a Scot who’s not a member of the Masons. But he can see no link between the two deaths. Mirabelle finds a connection of sorts when she learns that Mrs. Chapman also cleaned at the Brighton Pavilion, a moldering mess that’s still a former royal residence. At the pavilion they find restorer Daphne Marsden secretly in residence while she works to save historical objects. They also find a connection to Gillingham through Mrs. Chapman’s love of betting. Daphne holds the key to the motives for murder, but both Mirabelle and Vesta find themselves in a desperate situation when the killer targets them.

Adventurous and tough, the heroine must fight the perception that women are useless as sleuths, and her sidekick has an even tougher time battling prejudice against both women and black people as they unravel a puzzling mystery.

THOSE WHO FEEL NOTHING
by Peter Guttridge
Newsletter sign-up