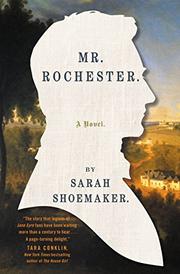 Puzzling over Rochester, the brooding romantic antihero created by Charlotte Brontë in her classic Jane Eyre, a debut novelist elaborates his back story and adds some new, explanatory developments to the tale.

Edward Fairfax Rochester meets Jane Eyre two-thirds of the way through Shoemaker’s sizable, solid first work of fiction, which means that most of her book is devoted to his earlier life and character formation, while the closing third retells the familiar narrative, this time delivered from his, not her, first-person perspective. It’s at that switchover point that “gruffness,” brusqueness, growling, and “foul mood[s]” begin to characterize the man who, previously, had seemed not so much angry as a wounded introvert. Shoemaker evokes Rochester’s comfortless childhood that leaves the boy “yearning for the larger shows of love” denied by his widowed father and callous elder brother, Rowland. Pining for a real home and family, he must make do with an eccentric private school and two friends, nicknamed Carrot and Touch, a learning-the-ropes job at a woolen mill under the not-unkind care of Mr. Wilson, and four lonely years at Cambridge University before setting off for Jamaica to make his fortune and fall into the engineered trap of marriage to mad Bertha Mason. As the years pass, Shoemaker disposes of Carrot, Touch, and Wilson, as well as Rowland and others, intensifying Rochester’s isolation at Thornfield-Hall, with Bertha raving in the attic. And then Jane arrives. While these facts conform largely to Brontë’s romance—there’s one significant departure—the character of Rochester doesn’t quite. This figure, who is submissive and unchallenging as a child and young man, lacks the saturnine charisma of the original. Also absent are the physical presence and the dangerous, irresistible dynamism of Brontë’s Byronic icon.

Reader, this lily needed no gilding.