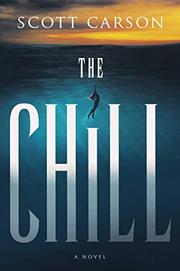 In the pseudonymous Carson’s debut, something uncanny has awakened in the swelling depths of upstate New York’s Chilewaukee Reservoir, aka “The Chill.”

It’s been nearly 80 years since the town of Galesburg was flooded to build the Chilewaukee, and the town didn’t go easy. A small contingent of people rebelled, leading to shocking acts of violence. Since then, an otherworldly evil has been waiting for the right time to take revenge against those responsible for destroying the town, which, on a clear day, can still be glimpsed just under the surface of the Chill. Opportunity presents itself in the form of Mick Fleming, chief engineer with the state’s division of dam safety, whose grandfather designed the dam. During an inspection, Mick’s concerns for the safety and integrity of the Chill—especially in light of recent unrelenting rain—are eclipsed by the appearance of a strange photographer who looks like a figure out of time, and Mick soon finds himself not quite in his right mind. Meanwhile, Gillian Mathers, an officer with the Department of Environmental Protection Police who has old familial ties to Galesburg, is sucked in when she responds to a report of an inexplicable murder at the dam that turns out to be something far stranger. Gillian, Mick, and others are soon drawn in by an insidious force, and inevitably, the sins of the past tragically collide with the present. The premise brims with creepy potential, and readers will learn more than they ever thought they wanted to know about dams and the challenges of harnessing a relentless force of nature that is often taken for granted. However, the meandering plot and muddled mythology eventually give way to scenes from a disaster film, with a thinly fleshed-out cast failing to provide the necessary emotional heft.