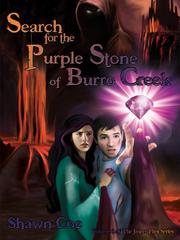 SEARCH FOR THE PURPLE STONE OF BURRO CREEK

In the first volume of the fantasy series, 13-year-old Jasper Flint is magically transported to an underground world in need of his help.

Eleven years after he was found on an orphanage’s doorstep with a mysterious purple gemstone around his neck, Jasper is entering a rocky adolescence. His adoptive parents don’t seem to care about him, the class bully won’t leave him alone and only his two friends seem to care he exists. But all that changes when he goes on a class field trip to a museum. Jasper and his friends get lost in an off-limits wing of the museum, where Jasper finds an ancient book and reads a passage aloud. Suddenly a doorway made of light appears and sucks him in, sending him hurtling down toward the center of the earth. After landing, he’s found and taken to the “Underworld” village of Chalcedon, where the people look like him and wear precious stones like his around their necks. From here, the plot is entertaining and suspenseful, with an interesting twist on the tried-and-true trope of underground cities. In this world, people can harness the power of their birthstones and they’re judged more on their magical abilities and personal integrity than on their physical appearance or prowess. Though many aspects of this world are preferable to the “Overworld” (with its bullying and disinterested adoptive parents), the villages of the Underworld are threatened by the evil tyrant Zircon. Although the plot rolls forward with subterranean drama, the writing could use substantial polishing to make it sparkle. Also, the dialogue is often stilted and unrealistic, which further clouds the excitement that is already sometimes halted by flat attempts at humor. Eventually, Jasper sets out on an adventure to recover the purple stone of Burro Creek, which has the power to send him back home, while at the same time he tries to help save the village from being destroyed. Some of the plot twists are unbelievable, even for fantasy, but younger readers may not be distracted. Instead, they’ll be waiting for the sequel.

THE CITY OF EMBER
by Jeanne DuPrau
Children