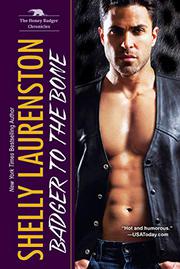 BADGER TO THE BONE

The final segment of the Honey Badger Chronicles pairs middle sister Max MacKilligan with an oblivious jaguar shifter who attempts to save her and winds up finding himself.

When an attempted kidnapping of honey badger shifter Max goes south, ZeZé Vargas, one of the kidnappers who's a shifter though he doesn't know it, tries to protect her and is injured. After Max takes ZeZé home to New York and he heals, she's prepared to turn him loose, but her older sister, Charlie, demands she take some responsibility and help Zé navigate his new reality. “You brought him here, Max. You told him the truth. Now you need to deal with the repercussions of those actions.” Zé soon learns how unique the MacKilligan half sisters are. Fiercely loyal and superlethal when they choose to be, they mostly want to be left in peace. However, thanks to their idiot father and Max’s criminal mother, who’s recently escaped from prison, everyone wants something from them—information, money, or skills, for instance—pitting them against mercenaries, hostile family members, and even law enforcement. In the midst of the chaos, Zé begins to make sense of the sisters’ odd relationships with each other and the vast, unexpected network of friends and allies around them, and for the first time, he feels at home in his own skin and right where he’s supposed to be, with Max by his side. Laurenston ends the MacKilligan sisters trilogy with a flourish, blending humor, action, and romance in her own inimitable and fabulous fashion, and she reminds us that family can be blood or choice and that different races (Max is half Chinese; Charlie is African American; Zé is Latino) and species can get along when they decide to, aided at times by baked goods. A sprawling cast of shifters combined with an intricate, complex plot can occasionally be confusing, but everything comes together in the end, and the characters, worldbuilding, and storytelling are vivid, inventive, and completely entertaining.