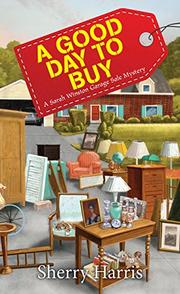 A GOOD DAY TO BUY

You meet a lot of people at garage sales. Some are made to be murdered.

Sarah Winston’s life has taken a turn for the better. The ongoing garage sale business she runs in Ellington, Massachusetts, and online is going well, and she’s dating her ex-husband, Police Chief CJ Hooker, who once dumped her for a younger woman. Sarah’s working on a garage sale for Velma and Verne Spencer, who plan a move to Florida. As a former Air Force wife, Sarah appreciates the laid-back Vietnam vet, but his wife drives her crazy. Things only get worse when she discovers Verne dead and his wife badly injured in their off-limits garage in the middle of the sale. As if that discovery isn’t traumatic enough, Sarah’s estranged brother, Luke, turns up at her apartment looking for a place to hide out. Luke claims to be working a story as an investigative reporter, but he won’t give her any details and refuses to talk about the years since he last saw her. Despite his reticence, she can’t believe that he was involved in Verne’s death even though his fingerprints have been found at the scene. Sarah continues to help Tim Spencer clear out his parents’ house while his mother lies unconscious in the hospital. When a homeless man is found dead near the Air Force base with Luke’s backpack in his possession, she still assures CJ that her brother is innocent. But why would anyone, anyone at all, want to kill Verne Spencer? That question turns out to be the key to the investigation Sarah persists in despite CJ’s warnings.

Harris’ fourth (All Murders Final!, 2016, etc.) is a slam dunk for those who love antiques and garage sales. The knotty mystery has an interesting premise and some surprising twists and turns as well.

I KNOW WHAT YOU BID LAST SUMMER
by Sherry Harris

MURDER ON THE HOUR
by Elizabeth J. Duncan
Mystery