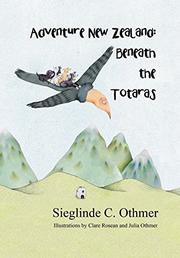 In this sequel, five dogs and two cats, who previously collaborated on a theatrical endeavor, travel to New Zealand to put on a show.

In her first children’s book, Sieglinde C. Othmer (Whims, Wits, and Whiskers, 2012, etc.), a published scholar of clinical psychiatry and psychology, combined her professional background and passion for animals in a humorous, pet-centered tale promoting friendship, personal growth, and creativity. The dogs and cats, who staged a production in a Missouri forest in their debut outing, continue learning life lessons in this sequel. The group takes its creative talents much farther afield—to a sheep farm in New Zealand. The animals’ new show has a purpose: to raise awareness for endangered kiwi birds. Transported to New Zealand in baskets carried by giant condors (a highly enjoyable bit of whimsy), the band includes wise Mr. Guinness, a Lab/pit bull; tenderhearted, shy Lexi, a Shih Tzu; Bailey, a peaceable Lab; the smart and snarky terrier Rosie; brash, hyperactive, and gassy George, a basset hound/beagle mix; French-speaking black cat Miles; and tabby Cosmo. Making new friends on the sheep farm, the group learns that stoats are threatening the kiwis in their forest habitat. Bashful Lexi is in the spotlight, finding strength through her compassion for the not-so-evil stoats and leading the band to a solution that works for all. As the story unfolds, the animals learn and grow while confronting and comforting one another through various conflicts, challenges, and triumphs. These vividly depicted, humanlike animal characters—who can use computers, wield paintbrushes, sing, and dance—are stand-ins for readers of any age struggling with similar self-doubts or other anxieties. Although a tone of benign lecturing is more prevalent here than in the preceding book, the author’s captivating alternative reality resonates with reassurance and coping strategies. Rosean (Whims, Wits, and Whiskers, 2012) again offers witty visual accompaniments to the text with deftly rendered ink and graphite drawings. Small images of flora and fauna, sketched with realistic details by debut illustrator Julia Othmer, are sprinkled throughout. (A warning: when overwhelmed by emotions, George uses the words “damn” and “bastards.”)

While some mild moralizing creeps in at times, this real world–based animal fantasy delivers resonant lessons in character-building and conflict resolution with humor and heart.