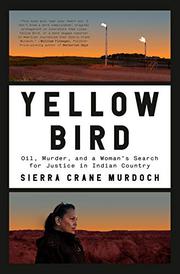 A murder on an Indian reservation changes lives—at least one for the better but most for the worse.

“For what? For a little bit of money?” Thus Marge Gunderson, the sheriff in the film Fargo, asking an unrepentant killer why so many people are dead at his hands. That might well serve as a refrain for this thoughtful work of true crime, its setting the badlands of North Dakota. There, writes journalist Murdoch, a man went missing in the newly opened oilfields of the Bakken boom. Few people gave Kristopher Clarke’s disappearance much thought until Lissa Yellow Bird, a member of the Mandan, Hidatsa, and Arikara Nation based on the Fort Berthold Reservation, made it her cause. When the author asked why she took an interest in the matter, Yellow Bird answered, “I guess I never really thought about it before.” The road to becoming a freelance investigator was long and circuitous: Yellow Bird had worked as a prison guard, stripper, and bartender before doing time for possessing narcotics “with intent to deliver.” On the tangled trail of the missing Clarke, a truck driver who, like everyone else, had come to the Bakken for a quick buck, Yellow Bird found something like redemption. “It seemed to Lissa,” writes Murdoch, “that the oil fields contained endless ways for a person to disappear.” Her narrative makes that much clear, as she chronicles Yellow Bird’s search across a vast, desolate landscape. What she discovered as she moved across that landscape was a microcosm of inept and principled cops, political divisions among tribes and clans, the ruinous effects of drugs and alcohol, and the always-appealing allure of fast money. “North Dakota is the only place in the country where somebody like me can go and make big money,” says one suspect. Thanks to Yellow Bird’s tireless search, the truth eventually emerged—with poor Clarke considered a “truly innocent victim” in an endlessly elaborate con game.

An impressive debut that serves as an eye-opening view of both the oil economy and Native American affairs.