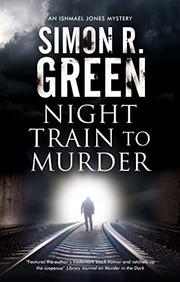 An alien special agent and his earthly companion have just 56 minutes to solve the murder of the new head of a secret agency.

Asked to keep Sir Dennis Gregson, the newest head of the Division, alive during the train trip from Paddington to Bath, Ishmael Jones is surprised to be given such a seemingly mundane job. As an alien with a certain set of skills, including superstrength, heightened awareness, and golden blood, Ishmael is typically assigned more unusual cases by his boss, the Colonel, in his highly secretive and undefined position with the organization. What could possibly go wrong on the short train ride that would warrant the supervision of such an elevated being? Along with Penny Belcourt, his human partner in life and work, Ishmael learns from the Colonel of a potential threat relating to the Psychic Weapons Division, which might mean that an attack on Sir Dennis could pass entirely unseen by any human gaze. Once on the nonstop train ride, Ishmael and Penny have barely settled in when Sir Dennis is indeed killed, leaving behind a car of fellow travelers who are now suspects. This is where Green’s latest diverges from his typical work (Till Sudden Death Do Us Part, 2019, etc.), with less focus this time on supernatural powers or forces than on three or four likely murderers, many of whom survive all the way to Bath. Ishmael and Penny methodically interrogate their suspects, each of whom is hiding something that may connect them to Sir Dennis’ death and all of whom, truth be told, seem more sympathetic than the dead diplomat. The finale brings Ishmael a shocking piece of information about his own history that may change the path of the series.

TILL SUDDEN DEATH DO US PART
by Simon R. Green
Mystery

MURDER IN THE DARK
by Simon R. Green
Sci-Fi

INTO THE THINNEST OF AIR
by Simon R. Green
Mystery

THE LOST CITY OF THE MONKEY GOD
by Douglas Preston
Fiction