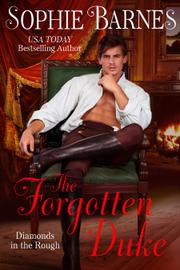 From the "Diamonds In The Rough" series, volume 5
by Sophie Barnes
BUY NOW FROM
AMAZON
GET WEEKLY BOOK RECOMMENDATIONS:

The prospect of an undesirable marriage drives a lady to seek refuge in a rogue’s tavern in this fifth installment of a series.

In this Regency romance, Lady Regina Berkly faces a preposterous arranged union when her father, the Earl of Hedgewick, says she will marry a sickly 14-year-old marquess the very next morning. As part of the upper class, Regina never expected to marry for love, but to confront “no hope of happiness” was taking duty too far. Mere hours before her wedding, she runs away and soon meets the notorious “Scoundrel of St. Giles,” Carlton Guthrie. Carlton seems to feel pity for Regina, offering her shelter in his tavern. But he is concealing an ulterior motive: He has a personal vendetta against Regina’s father. Past attempts at retribution have taught him that “bringing a peer to his knees was no simple task.” Regina will serve as unwitting leverage, with her virtue at stake. Over time, Carlton’s commitment to the scheme falters. He is drawn to Regina, yet when she is open to intimacy, he realizes he can no longer toy with her ruination: “Ye’ve a future that cannot include me, luv, and I’d hate to be yer biggest regret.” Regina’s presence at the tavern is eventually discovered, and when she is pulled away from Carlton, he realizes “she’s the dream I dare not allow myself to have.” Carlton must decide if he can trade his desire for vengeance for Regina’s love. In this latest entry in the Diamonds in the Rough series, Barnes’ (The Infamous Duchess, 2019, etc.) Regency setting is a little less lush than those offered by some other historical romance novelists, lacking the assortment of fashion, decorative, and etiquette details that create an immersive story. But the disparity between Regina’s wealthy family and the poverty of St. Giles is effectively contrasted. The tale becomes a bit stagnant in the middle since Regina is in hiding with limited possibilities for appearing in action scenes or dealing with the supporting cast. But once the heroine comes out of hiding, the third-act momentum increases, resulting in a vibrant and satisfying conclusion.

An enjoyable tale for Regency fans who like revenge plots in their romances.