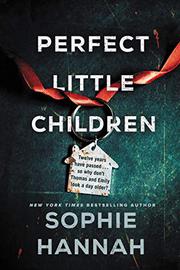 A woman reunited with an estranged friend discovers that nothing about her has changed in 12 years—including the ages of her children—and can’t rest until she solves the mystery.

Beth Leeson has always wondered what happened to Flora Braid after their friendship fell apart. But the Braids moved away, and they lost touch. Twelve years later, Beth decides to check on her and spies Flora coaxing her two small children, Thomas and Emily, ages 5 and 3, out of their car—which is crazy, because that’s how old the kids were when Beth knew them. By now they should be teenagers. And the Braids’ youngest child, Georgina, isn't there at all. Beth isn’t crazy. She knows what she saw. Her daughter, Zannah, serves as a precocious sounding board for her evolving, and sometimes outlandish, theories: “Even if a science genius invented a drug that stopped people aging, they wouldn’t freeze their kids in time at three and five. Those are pain-in-the-arse ages. You might freeze your kids at, like, nine and eleven,” Zannah says to refute the idea that Thomas and Emily were part of a genetic experiment. But the simplest explanation they can think of—that the children are Thomas and Emily’s younger siblings—doesn’t quite add up. Why would Flora give all her children the same names? The question then becomes, how well did Beth really know the Braids? With a combination of social media stalking and amateur detective work, Beth tracks down Flora and her husband, Lewis, in both England and Florida and discovers that her old friends are leading double lives in more ways than one. Initially, the bond between the two women seems too weak to warrant such an intense search, but as Beth considers the problems that Flora might’ve been dealing with years ago that she hadn’t noticed, her curiosity thaws into genuine concern that turns her mission into a moral imperative.

Save a friendship, save a life—a surprising lesson for an unusual and absorbing thriller.

THE NEXT TO DIE
by Sophie Hannah
Mystery

THE MYSTERY OF THREE QUARTERS
by Sophie Hannah
Mystery

A GAME FOR ALL THE FAMILY
by Sophie Hannah
Mystery

WOMAN WITH A SECRET
by Sophie Hannah
Newsletter sign-up