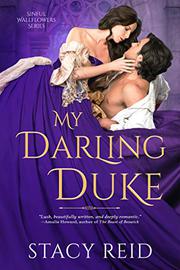 A woman’s scam of passing herself off as a duke’s fiancee succeeds all too well in this Regency love story.

Impoverished viscount’s daughter Katherine “Kitty” Danvers doesn’t have enough dowry money to snag decent marriage proposals for herself or her sisters. But she has a plan for that: tell London’s gossip columnists that she is engaged to Alexander Masters, duke of Thornton, so that fashionable hostesses will invite the Danverses to parties and connections-seeking swains will vie for her sisters’ hands. That it’s all a lie doesn’t matter, Kitty reasons, because the reclusive duke, immured in his remote Scottish castle for the last seven years, will never hear of her fraud. Kitty instantly becomes the toast of London’s ballrooms. When Alexander’s puzzled lawyer makes inquiries, she bluffs him and winds up with a mansion and credit lines at the best shops, all billed to the duke. Then Alexander, who does indeed read the society pages, shows up at a ball Kitty is attending. The jig seems to be up, but Alexander is intrigued by her gorgeous eyes and sheer chutzpah. Kitty, in turn, finds Alexander roguishly sexy despite the injuries from a fire that have scarred half his face, made walking difficult, and rendered him impotent. Alexander agrees to keep Kitty’s secret but only if she spends a fortnight at his castle without a chaperone, a proposition so outrageously improper that she almost declines it. Thrown into improbable intimacies—a bridge collapse necessitates their helping each other out of their wet clothes— their fencing gives way to kissing and much more until Alexander’s guilt at not being able to give Kitty children threatens to end their now authentic-feeling engagement. Reid’s (Sophia and the Duke, 2019, etc.) adept take on “Beauty and the Beast,” the first installment of her Sinful Wallflowers series, sends up Austen-esque social conventions while nicely teasing out their dramatic tensions and adding some Twain-ian rascalry. The sparkling story features lively characters with plenty of raffish charm and prose that’s snappy while retaining an elegant period feel. (“So you do not regret riding astride…twice, daring to attend Lady Appleby’s ball without a corset, and rescuing a cat in a tree?” Alexander prods, citing Kitty’s much-reported transgressions against feminine decorum.) The result is a stylish yarn with real literary chops.

An entertaining romance nicely balanced between hot-and-bothered lust and droll dramedy of manners.

THE BEAST OF BESWICK
by Amalie Howard
Fiction

A MATCH MADE IN LONDON
by Christina Britton
Fiction