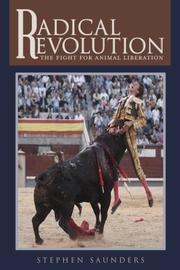 A debut book contends that humanity can save itself through veganism.

These days, it seems people are facing more existential crises than they have time to contemplate: climate change, environmental degradation, income inequality, sexism, racism, and plain old violence. “I believe that man can change,” writes Saunders in the introduction to this work. “But it will take a revolution of empathy, compassion, and mercy, not toward the human species but toward the creatures with whom we share this earth—the animals.” According to the author, humans’ carnivorous behavior is their true original sin, the one that underlies all the others. The torture and slaughter of animals are injustices that people have rationalized, making it easier for them to defend other systems of subjugation, like patriarchy, white supremacy, and capitalism. Saunders takes readers through a wide range of disciplines and eras to make his case, exploring the origins of hunting and eating meat, contemporary research on what nutrients people need (and from what sources they are available), and how veganism builds on the values of earlier radical groups like the Romantics, the Luddites, the Transcendentalists, and abolitionists. Drawing from science, literature, and politics, the author maintains that the next stage of human freedom is to untether the race from the greatest vestige of its unenlightened past: the flesh of other creatures. Saunders demonstrates a good deal of erudition, but his tone is often abrasive and hyperbolic, as when he attempts to discredit high-protein, low-carb diets: “You may lose weight in the short-term on a low-carb diet if your goal is to fit into a skinnier casket.” With his cherry-picked nutritional studies, jeremiads against capitalism, and fondness for quoting Thoreau, the author will likely remind readers of a particularly dogmatic undergraduate. That is unfortunate, since this approach obscures his most enthralling and persuasive argument—that living off the killing of animals decreases people’s empathy. Tone aside, there is much here that should give the progressive meat eater pause. The book is a reminder that while vegans may sometimes sound patronizing to carnivores, their complaints about the food system cannot be ignored forever.

An intriguing, if somewhat heavy-handed, argument for veganism.

THE MORAL LIVES OF ANIMALS
by Dale Peterson
Newsletter sign-up