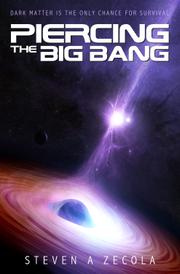 Dark Matter Is the Only Chance for Survival
by Steven A. Zecola
GET WEEKLY BOOK RECOMMENDATIONS:

Diverse alien cultures predating the Big Bang face the contracting of their universe and attempt to survive the Singularity apocalypse.

This sci-fi novel by Zecola (The Race to Cure Parkinson’s Disease, 2011, etc.) draws a quick picture of the teeming universe before the storied Big Bang, when space was in a period of gradually increasing contraction. The early encyclopedia-like (akin to The Hitchhiker’s Guide to the Galaxy) chapters describe four alien worlds and the intelligent life on them. They also reveal how these beings reacted once they perceived an approaching apocalypse, with their universe inevitably fated to collapse into a tiny, hot, dense Singularity. Some religion-centered beings simply opt to do nothing, believing their souls will persist in the afterlife and that’s that. On a different planet, egg-shaped inhabitants of surpassing intellect—but not the best at public administration—could eventually think of a solution (in fact, it was these aliens’ runaway technology that triggered the approaching doom). But they lack the means to implement it, as internal revolt wracks their flawed society. Another civilization includes invisible mutants who are able to elude the giant, saurian predators roaming their planet. But the Singularity threatens this sphere’s equilibrium. And one world hosts three intelligent life forms who “cohabitate and thrive in a shared setting,” an ability that could “prove very useful” in the challenges ahead. In his short book, Zecola’s strange payoff is that the beings on each of the four planets have some of the key ingredients to solve the problem of how to survive the Big Bang. Only by seeing past their differences, communicating with one another, and fully cooperating in the centuries-long countdown will they be able to pull it off. The author lucidly shows this as an example of supreme project management, deftly pinpointing examples of altruism, foresight, and the act of leaving the “forces of evil” at the door. (Or the wormhole, or the porthole, or whatever.) Employing puns in the names of places and species (“Mulligans,” “Broadcoms,” etc.) gives the material a fable aspect. Readers interested in extensive project management will discover some helpful advice here. But traditional genre fans will likely find that the tale delivers lots of bullet-point sermonizing.

A peculiar guide to large-scale cooperation and achievement, disguised as a sci-fi fable.

THE RETURN OF THE RAGPICKER
by Og Mandino
Newsletter sign-up