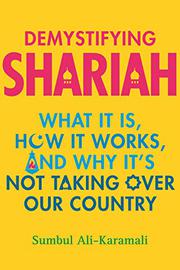 What It Is, How It Works, and Why It's Not Taking Over Our Country
by Sumbul Ali-Karamali
BUY NOW FROM
AMAZON
GET WEEKLY BOOK RECOMMENDATIONS:

An examination of Shariah, a concept that has been distorted in the U.S. and elsewhere in recent years.

Ali-Karamali, author of The Muslim Next Door, attempts to explain the meaning of Shariah to non-Muslims, emphasizing it as a benign and indeed beneficial trait of Islam. After a section introducing readers to basic fundamentals of Islam—e.g., Who was Muhammad? What is the Quran?—the author begins to unwrap the meaning of Shariah itself. Refreshingly, she shies away from giving a simple definition, instead characterizing Shariah as a broad and in some ways all-encompassing system of Islamic wisdom. In fact, in the introduction, she writes, “in religious terms, shariah is the path you take to quench your spiritual thirst….It’s the path you follow to be a good and righteous person. In a nutshell: shariah is the way of God.” Throughout the book, Ali-Karamali notes that Shariah, in its truest form, was and is entirely flexible and adaptable to varying cultures and conditions. It was built on generations of scholarly analysis and interpretation of the Quran and the Hadith (the words and acts of Muhammad). The author argues that for generations, Shariah promoted a healthy, fruitful civilization marked by concern for those in need, clemency, and the rights of women, among much else. She contends that Western colonization interrupted Muslim cultures, disrupting and perverting Shariah, forcing it to conform to more rigid standards found in European law. As she explains, Muslim-majority countries continue to grapple with how to rediscover the flexible, liberalizing Shariah practices of the past. Ali-Karamali’s explanation of Shariah is a useful counter to the perceptions of many in the West. Throughout, she contends that the misuse of Shariah is limited to a miniscule fraction of Muslims and that without European interference, everything from the Ayatollah Khomeini’s abuses of power to the rise of the Islamic State group could have been avoided.

Ali-Karamali may overstate the case somewhat, but her book is significant in a time of continued misconceptions about Islam.

WHEN ISLAM IS NOT A RELIGION
by Asma T. Uddin
Nonfiction

WHAT THE QUR'AN MEANT
by Garry Wills
Nonfiction

A HISTORY OF ISLAM IN 21 WOMEN
by Hossein Kamaly
Nonfiction

GOD IN THE QUR'AN
by Jack Miles
Newsletter sign-up