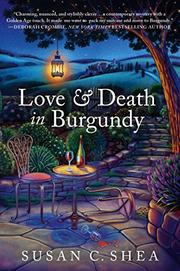 A woman desperate to fit into her community is given her chance by the death of a man with a past.

Michael Goff lost his shot to become a rock star when his band members dumped him while stealing his songs. Now he lives with his wife, Katherine, in the insular Burgundy town of Reigny-sur-Canne. A lump-sum payment from the band has barely given the couple enough to live on, and after three years Katherine still lacks any real local friends. So she hopes her plan to run the town's annual festival will help her overcome the long memories and suspicions of local doyen Madame Pomfort and her followers. Unfortunately, the luncheon Katherine gives for local ladies is spoiled when the wealthy Albert Bellegarde smashes a plate over the head of Yves, a local bookseller who’d recently dumped his daughter. When Albert is found dead at the foot of a steep flight of stairs, his wife, Adele, calls Katherine, asking for help until her daughter arrives from Paris. The police investigation, much longer than it might be for a simple accident, sets tongues wagging. Meanwhile, Michael wonders whether he should try reviving his career by making an album and touring with Betty Lou Holliday, a famous American country singer whose own career could use a jump start. J.B., Betty Lou’s husband and manager, is set on having Michael record with her. Katherine is a mother figure to Jeannette, a young local woman, whose father is a known thief. Jeannette is adept at snooping around the neighborhood and is not above stealing Katherine’s silver spoons herself. Although solving the death is at the top of Katherine’s agenda, she must do so to protect Jeannette and perhaps gain the village’s acceptance.

Shea (The King’s Jar, 2013, etc.) kicks off a new character-driven series with an amusing portrait of life in a tiny French town that turns out to be integral to solving what may or may not be a murder.

DRESSED FOR DEATH IN BURGUNDY
by Susan C. Shea
Mystery

TEN TREES AND A TRUFFLE DOG
by Jamie Ivey
Mystery