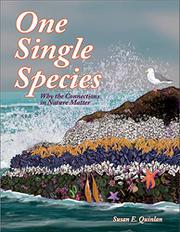 This children’s book examines a scientist’s experiment that shows the importance of a single species within an ecosystem.

In her latest science work for young readers, Quinlan (The Case of the Monkeys That Fell From the Trees, 2003, etc.), a wildlife biologist, writer, and artist, explains the important ecological research of Robert T. Paine (1933-2016). Interested in the intertidal zone ecosystem, the scientist studied Washington state tide pools and their characteristic sea life, including barnacles, mussels, sponges, algae, limpets, anemones, and more. He noticed that ochre sea stars were important predators in this system and wondered what the effect would be of removing them from their rocky shoreline habitat. An experiment to test this question led to startling results: “More than 26 species of anemones, chitons, urchins, limpets, whelks, and algae that had thrived in the lower intertidal zone no longer had space to live. They were completely crowded out by the mussels.” When the ochre sea stars were reintroduced, the ecosystem gradually recovered. The experiment proved that “keystone species,” to use Paine’s phrase, were crucial to the health of Washington’s tide pools. Scientists studying other ecosystems also identified keystone species. Their work proved that the delicate balance of an ecosystem can be affected or even destroyed by just a single species’ disappearance. The author’s beautiful full-spread illustrations capture the atmosphere, variety, and splendor of Washington’s coast along with lovely depictions of sea life and other creatures. Without getting overly technical, Quinlan explains the sometimes-complicated concepts with clarity and energy. She gives readers a chance to see how a working scientist conducts experiments, conveying a sense of exploration, curiosity, and wonder at the interconnectedness of things. This is greatly bolstered by a section that provides capsule descriptions of other keystone species around the world, such as the northern flying squirrel, the little auk, the mound-building termite, and the African elephant, and why they’re crucial. For example, mound-building termites construct “extensive underground tunnels and farm fungi that break down wood and other plant material the termites gather. These actions enrich the soil with nutrients.”