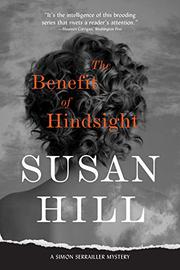 THE BENEFIT OF HINDSIGHT

Serial robbers turn to murder when a cop just returned from leave keeps their early strikes under wraps in the English town of Lafferton.

Recovered as much as he can from the loss of his arm, Detective Chief Superintendent Simon Serrailler has achieved enough proficiency with his prosthetic arm to feel ready for his next case. A robbery seems so carefully planned that Simon is sure the burglars will strike again as long as they think no one’s on to them, so he orders his officers to keep the case quiet. Besides, getting his team to alert the neighbors of potential danger might take up valuable resources, and Simon’s supervisor and brother-in-law, Kieron Bright, has emphasized the need to economize whenever possible. An especially timely infusion to the department’s budget comes in the form of a new van donated by Declan McDermid and his wife, Cindy. At the reception to celebrate the gift and honor the donors, Simon watches as his sister, Cat Deerbon, who's a doctor, chats up Cindy as a possible friend and new patient of the private medical practice Cat’s working for. But when Cat goes to visit Cindy the next day, she finds the house robbed, Declan hurt, and Cindy killed. Simon struggles to balance his professional insights with his newfound health concerns. He keeps having dizziness and heart events that medical professionals persist in diagnosing as anxiety, though he’s certain that a cup of coffee will cure all his ills. Cat is meanwhile absorbed by pregnant Carrie Pegwell, a new patient convinced there’s something wrong with her unborn baby despite medical evidence that prompts Cat to guarantee a healthy birth and child. As Simon and Cat each wrap up their stories, they compare notes about how hindsight would have been helpful, then shrug it off in a way that might have readers wondering what it’s all been for.

THE COMFORTS OF HOME
by Susan Hill
Mystery

THE SOUL OF DISCRETION
by Susan Hill
Mystery

THE MIST IN THE MIRROR
by Susan Hill
Mystery

A QUESTION OF IDENTITY
by Susan Hill
Mystery

THE BETRAYAL OF TRUST
by Susan Hill
Fiction

THE VOWS OF SILENCE
by Susan Hill

ALL THE SECRET PLACES
by Anna Carlisle
Mystery

THE EDGE OF NORMAL
by Carla Norton
Newsletter sign-up