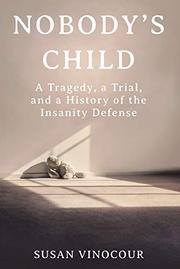 A Tragedy, a Trial, and a History of the Insanity Defense
by Susan Nordin Vinocour
BUY NOW FROM
AMAZON
BARNES & NOBLE
LOCAL BOOKSELLER
GET WEEKLY BOOK RECOMMENDATIONS:

A mentally ill grandmother’s desperate plight exposes a deep gulf between science and the law when it comes to the insanity defense.

For two days after her 3-year-old grandson died, Dorothy Dunn (a pseudonym) slept with the boy’s corpse, moving it on and off a heating grate hoping to maintain a lifelike body temperature. That and other unfathomable actions factored into the insanity defense Dunn’s public defender built after a prosecutor charged the “compliant and meek,” impoverished, black mother of five with second-degree murder. Debut author Vinocour—a clinical and forensic psychologist who had earlier practiced law and later served as an expert witness in Dunn’s trial before a largely white jury—evaluated the defendant and found her to be mentally ill. The author reconstructs the case in a chilling book that interpolates into Dunn’s tragic story a history of the insanity defense and famous related events, including the attempted assassinations of James Garfield and Ronald Reagan and the 1999 massacre at Columbine High School. Insanity defense laws vary by state, but Vinocour argues persuasively that the law overall lags far behind scientific research on mental illness. A widely used legal test of insanity is whether someone knows “right” from “wrong,” but mental illness is too complex for that standard, which implies falsely that “an intelligent or educated person can never be, legally, insane.” Though the author has changed many “identifying details,” making it uncertain that the events unfolded, as she writes, in Rochester, New York, and other pertinent facts, the story is unquestionably a page-turner, and revealing the ending would be a spoiler. It’s fair to say, however, that in this case, nobody wins—except perhaps for a prosecutor later elected judge after unironically billing himself as a defender of “the highest standards of the criminal justice system.”

A satisfying courtroom drama that hits the sweet spot between good storytelling and sharp legal analysis.