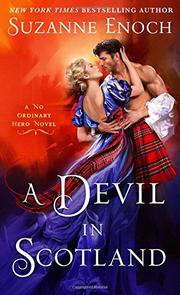 A DEVIL IN SCOTLAND

Murder and intrigue shadow a second-chance romance in 1816 Inverness.

In her third No Ordinary Hero novel, Enoch (My One True Highlander, 2017, etc.) tells the story of the reunion of childhood friends Callum MacCreath, the younger brother of a Scottish earl, and Rebecca Sanderson, an English transplant to the Highlands. Callum returns from America after news of his brother’s accidental drowning reaches him in Kentucky. He had left after a furious argument over his staid sibling's engagement to Rebecca but now vows to hunt down those he believes killed Ian—even if that includes her. It's not long before love for his niece begins to compete with his anger, however, and his widowed sister-in-law’s presence reminds him that his exile was fueled by a broken heart at being spurned by her. Lest we flinch at the pairing, Enoch pointedly has him remind Rebecca (and us) that levirate marriage, the practice of a single man marrying his brother’s widow, was acceptable in the Highlands. While Rebecca is initially dismayed at his return and dismissive of his claims of foul play, there is no mistaking that they are drawn to each other and that he will do anything to protect her daughter. As evidence of murder mounts and they join forces, their fierce arguments change to passionate lovemaking (though a sex scene at a ball after which Rebecca returns to the dance floor to join a quadrille is a bit wince-inducing, hygienically speaking). The villains are known from the start (of the series and the novel), so the intrigue plot is less a whodunit and more about how the final vengeance will unfold and whether our protagonists will be hurt in the process. Less angst-y than Elizabeth Lowell’s Redwood Empire or Sherry Thomas’ My Beautiful Enemy, this lost-love-regained romance will appeal to fans of alpha-male Scots in kilts.

A carousing young Highlander turned into a formidable man, a practical widow who balances love and levelheadedness, a precocious child, a pet wolf, and a sneaky Skye terrier—a recipe for an entertaining read.

HERO IN THE HIGHLANDS
by Suzanne Enoch
Fiction

ROGUE WITH A BROGUE
by Suzanne Enoch
Fiction

THE HANDBOOK TO HANDLING HIS LORDSHIP
by Suzanne Enoch

THE AMULET
by Norma Sluman
Fiction