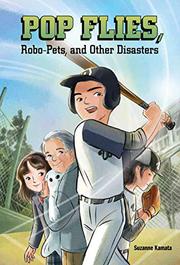 POP FLIES, ROBO-PETS, AND OTHER DISASTERS

A 13-year-old boy struggles to save his baseball team, help care for his grandfather, and avoid bullies in Tokushima, Japan, in this middle-grade novel.

For Matsumoto Satoshi, his passion for baseball is the one thing he can count on to help him fit in at Tokushima Whirlpool Junior High School after growing up in Atlanta. It also connects him to Oji-chan, his grandfather, who is struggling with dementia but who still remembers vast amounts of baseball trivia. When Satoshi learns that his team might get cut if it fails to win a tournament, he becomes determined to help save it. But this isn’t easy, especially since teammate Shintaro constantly finds reasons to harass him for his American habits. Satoshi’s English teacher also singles him out in class, at one point hitting him with a notebook. Fearing further alienation, Satoshi pushes away Misa, a kind classmate whose mixed Japanese and American ancestry makes her a target of bullying, and he avoids the other English-speaking students. He also conceals his younger sister Momoko’s deafness and use of a wheelchair from his peers out of fear that he will be harassed—a concern that turns out to be justified. When a mistake in a game puts Satoshi’s position on the team in question, he has to decide who and what really matters to him. Kamata (Indigo Girl, 2019, etc.) provides plenty of action-heavy baseball scenes for sports fans and includes details about the Japanese history and traditions of the game. At the same time, Satoshi’s commitment to his grandfather and his anxieties about failing to conform are emotionally realistic and complex and will resonate with readers who are facing isolation in a new place. Passages about Momoko unfortunately focus more on what other people do to help her than on her individual voice. The characters are Japanese or part Japanese with the exception of one white American teacher. Bishop’s (Great Grandpa Is Weird, 2016) intermittent manga-influenced, gray-tone illustrations deftly highlight action or emotion in key scenes, sometimes using multiple panels and comic-book dialogue; the style emphasizes the characters’ youth.

An engaging, sports-focused, family-driven Japanese spin on the new-kid-in-school narrative.

ROY MORELLI STEPS UP TO THE PLATE
by Thatcher Heldring
Children

FORCE OUT
by Tim Green
Children

SAVE ME A SEAT
by Sarah Weeks
Children

PIE IN THE SKY
by Remy Lai
Newsletter sign-up