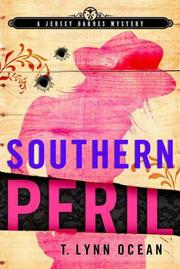 Jersey Barnes (Southern Poison, 2008, etc.) once again tries to settle down in Wilmington, N.C., only to be tapped for action by a judge who needs a favor. The judge, who suspects that her brother Morgan is in trouble, requires Jersey’s investigative skills and connections. Apart from the untimely deaths of both Morgan’s parents, as well as his unceremonious dumping by a fiancée, Jersey sees nothing wrong with his life. But she decides to poke around anyway, if only to occupy the time while her kind-of-boyfriend Ox is away with his daughter. While Jersey’s checking up on Morgan at the restaurant he’s just inherited, they’re both attacked by a mysterious one-eared man. Jersey’s habit of coordinating her outfits with matching weapons saves them both, but the attack primes her to snoop around in earnest. It turns out that Morgan is being investigated by foxy DEA agent Brad, Jersey’s male counterpart in appearance and attitude. The two unofficially team up to form a hot and hotter crime-fighting team, investigating together and sharing information—well, most information—as they uncover more about a secretive drug ring, implicating Morgan’s parents and the restaurant. Jersey, who finds help in the most unlikely places, discovers that her otherwise befuddled father Spud is a former sleuth himself. Now if only she can just put the pieces together while avoiding Brad’s advances, all before Ox returns.

FOOL ME ONCE
by T. Lynn Ocean