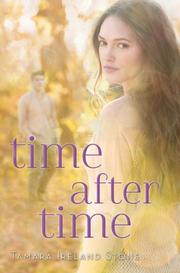 Bennett mooches around his family’s high-end San Francisco house in 2012, waiting for his girlfriend, Anna, to return to Evanston, Ill., from her summer in Mexico—in 1995.

Bennett uses his amazing, inexplicable ability to travel through time to visit Anna in a series of trips that can’t feel anything but futile. With 17 years between them, how can this romance survive? Anna’s parents, ignorant of Bennett’s abilities, become increasingly resentful of his seemingly cavalier treatment of their daughter. If he can’t stick around, why doesn’t he just leave her alone? And why does Anna put up with it? Meanwhile, in 2012, Bennett begins to use his talent the way his father always wanted him to: to correct senseless tragedies. Remarkably, he feels great after these interventions, not drained and afflicted by migraines the way he usually does after traveling back through time. Conversely, his returns from visits to Anna are becoming increasingly bloody and debilitating. Bennett serves as present-tense narrator of this sequel, describing his various agonies, physical and emotional, as he continues to pursue this hopeless relationship. Once again, Stone fails to provide readers with a solid understanding of Bennett’s singular ability, seemingly changing the rules to suit her plot and characters—up to and including an apparently impossible resolution.

There’s romantic angst aplenty but little else to keep readers invested in either story or characters. (Fantasy. 12-16)

TIME BETWEEN US
by Tamara Ireland Stone

BOTH SIDES OF TIME
by Caroline B. Cooney
Children

THIS STRANGE AND FAMILIAR PLACE
by Rachel Carter
Children