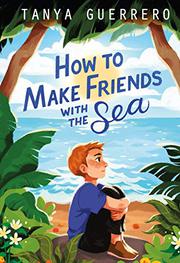 HOW TO MAKE FRIENDS WITH THE SEA

A boy struggles with anxiety amid significant life changes.

Pablo and his mother move around every few months and are currently residing in the Philippines. Ever since he was little, things bothered Pablo, but after his parents’ divorce, Pablo has picked up more anxieties, ranging from tiny things like germs and crumbs to the sea—his biggest fear. On Pablo’s 12th birthday, his mother brings home an orphaned Filipino girl with a cleft lip. Chiqui, as they call her, doesn’t understand English, won’t speak, and has a hard time adjusting to her new environment. At first, Pablo hates the change, but one evening Chiqui speaks to him and only him. Pablo realizes he wants to be strong for Chiqui and to protect her, and that feeling might be bigger than all his fears, even the sea. As related by Pablo, this is an indelible depiction of a child’s struggle with mental health. Readers learn empathy as they feel Pablo’s heartbreaking struggles firsthand, but they also experience the loving relationships that help him overcome them. Guerrero touches on many topics—anxiety, fostering, friendship, family, selective mutism, and more—seamlessly weaving them all together to create a strong, moving narrative. Originally from Spain, Pablo’s mother mixes English with her native tongue, and other characters often speak Tagalog. Pablo and his mother are both white.