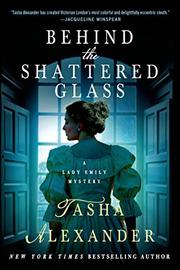 BEHIND THE SHATTERED GLASS

Nothing lowers the atmosphere of a country estate more than a corpse on the library floor. Fortunately, no one can solve the murder more graciously and expeditiously than Lady Emily Hargreaves in this frothy Victorian whodunit.

When Archibald Scolfield, the Marquess of Montagu, staggers into the Hargreaves’ ancestral home and falls dead on the Axminster carpet, Lady Emily is reluctant to consider the most obvious suspect: his cousin and her neighbor, Matilda. Archibald’s death means that Matilda will become a marchioness in her own right—until a long-lost heir conveniently arrives to claim the title. In the course of their decorous probing, Lady Emily and her husband, Colin, discover that Archie was not quite as noble as his lineage would suggest, and the list of suspects grows accordingly. A subplot about illegitimacy and downstairs intrigues involving the housemaid, Lily; a vindictive kitchen maid; and Simon, Earl Flyte, further confounds the Hargreaves, who have to contend with a gaggle of suspects until they realize where they should have been looking all along. The cigar-smoking, Homer-quoting Lady Emily, who’s meant to be a liberal-minded renegade in a Worth gown, is jarringly misplaced in her century, and it’s especially disappointing that she uses her wealth and influence to steer events toward not one but two improbable outcomes.

Alexander brings back her husband-and-wife detective team (Death in the Floating City, 2012, etc.) in a tale most likely to appeal to readers who like a little naughty homicide blended into their cozy period romance.

IN THE SHADOW OF VESUVIUS
by Tasha Alexander
Mystery

DEATH IN THE FLOATING CITY
by Tasha Alexander

A PLACE OF CONFINEMENT
by Anna Dean
Mystery

DEATH COMES TO THE SCHOOL
by Catherine Lloyd
Mystery