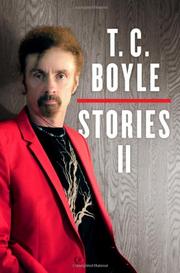 Picking up where he left off with his first volume of collected stories in 1998, Boyle (San Miguel, 2012, etc.) serves up an overstuffed gathering of goofy premises and serious turns.

Boyle turns Raymond Carver on its side with his relentless insistence that ordinary life is populated by people of glorious weirdness and is, for the most part, far from dreary. The sentiment may be a 1960s holdover, for, in a sharp introduction that (unlike a few stories) goes on too short, he observes that when he started out, he was “a hippie’s hippie, so blissed-out and outrageously accoutered that people would stop me on the street and ask if I could sell them acid.” Some of these stories have an oddly psychotropic effect, and perhaps origin: Who else would dream up a story about a lovelorn immigrant who digs underground labyrinths on the California frontier? Boyle notes that as he gets that much closer to the void, “the long dark road that inescapably ends in an even darker place,” he tends to more nonwhimsical turns, but he still engages full-tilt in explorations of the unbeaten path, arguing against the bulk of his fellow professors, “I say write what you don’t know and find something out.” Amen. Boyle doesn’t usually write short, and some of his stories threaten to deflate before he’s quite done with them, but most are gems, marked by beautiful language (“Whiteness loomed, the pale ethereality of nothingness, and blackness too, the black of a dreamless sleep”), nicely imagined moments (a young man reads Crime and Punishment and, just in time to be deterred from existential crime, goes on a picnic), and occasionally dashed dreams—yes, à la Carver—as when a once-famed ballplayer returns to Venezuela in disgrace and has to sell his beloved Hummer, “replacing it with a used van of unknown provenance and a color indistinguishable from the dirt of the streets.”

A fine and welcome summation—till the next volume—by one of the best storytellers at work today.

OUTSIDE LOOKING IN
by T.C. Boyle
Fiction

THE RELIVE BOX AND OTHER STORIES
by T.C. Boyle
Fiction

THE TERRANAUTS
by T.C. Boyle
Fiction

THE HARDER THEY COME
by T.C. Boyle
Fiction

WHERE I'M CALLING FROM
by Raymond Carver
Fiction

MOMENTARY ILLUMINATION OF OBJECTS IN MOTION
by Jason Arias
Fiction

HOW TO BEST AVOID DYING
by Owen Egerton
Fiction