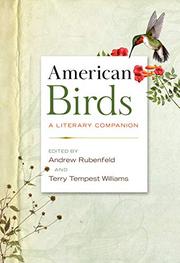 Can one diagnose the state of a nation through its attitude toward its aviary? This new volume from the Library of America makes such a project seem possible, assembling a centurieslong archive of U.S. bird writing that claims to act as nothing less than a “field guide to the American soul.” Indeed, a well-worn literary history can be wrought from these pages: From Lewis and Clark’s meticulous taxonomizing, through Thoreau’s starry-eyed transcendentalism, to Bishop’s magisterial modernism and the elegiac atmospherics of latter-day Erdrich. But lesser-known texts shine amid their star-studded company, such as Sarah Orne Jewett's early (1886!) environmentalist short fiction and John Hollander’s 1968 calligram in the shape of a swan and its reflection on a pond. The entries are unified by a sense of heightened attention induced by the writer’s encounter with a wild, flying thing; beyond this, however, the genres, moods, and styles are as diverse as the birds they catalog. (That said, 20th-century poetry gets more than its fair share of pages, and there is a disappointing but predictable preponderance of men to women writers.) On the whole, one gets the sense that birds hold a special symbolic place in the American experiment: a fantasy of freedom as manifest in flight, alluring yet unattainable, a perpetual promise remaining elusive even after the airplane. Robert Creeley writes the paradox beautifully: “The birds, / no matter they’re not of our kind, / seem most like us here. I want // to go where they go, in a way, if / a small and common one.”

An exquisite compendium celebrating America’s ornithological obsession from its Colonial origins to its fractious present.

THE HOUR OF LAND
by Terry Tempest Williams
Nonfiction

WHEN WOMEN WERE BIRDS
by Terry Tempest Williams
Nonfiction