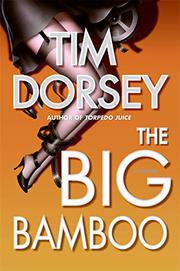 Vistamax is in deep doo-doo, as even Mel and Ian Glick, the coked-up twin brothers who run the studio, acknowledge. Their annual prestige production, All That Glitters, is a bazillion dollars overbudget, and director Werner B. Potemkin is demanding daily rewrites, the latest of which combines the attack on the Death Star with the parting of the Red Sea. Agent Tori Gersh is threatening to put the kibosh on the brothers’ hobby of raping starlets unless they put Ally Street, her client and their latest conquest, in a leading role. But before you can say “Print it!,” Ally disappears after a chat with Ford Oelman, a Vistamax prop man the Glick brothers fire after stealing his script. The property in question is a caper based on the Alabama scam run by Sergio Storms, granddad of none other than little Serge, who’s come out West to explain to the film industry why films about Florida shouldn’t be shot in Coronado. Of course, with Serge at the helm, quite a few other things get shot, as well as nail-gunned and slammed in car trunks, as he whips up a climax even Potemkin couldn’t have anticipated.

NO SUNSCREEN FOR THE DEAD
by Tim Dorsey
Fiction

THE RIPTIDE ULTRA-GLIDE
by Tim Dorsey