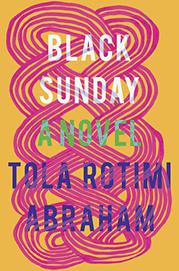 In this piercing, supple debut, a Nigerian father is scammed into ruin, and his wife, wearing her "favorite perfume, Elizabeth Arden’s Red Door," soon flees to New York. The couple had honeymooned in Spain and lived a comfortable life, but “my family unraveled rapidly,” says their daughter Ariyike, “in messy loose knots, hastening away from one another, shamefaced and lonesome, injured solitary animals in a happy world.” Ariyike sells water on the Lagos streets while her sister scrubs hospital toilets, their younger brothers both hungry and in need of school fees. All subsist with their complaining Yoruba grandmother. In a riveting sequence, Bibike helps her twin, Ariyike, transform into Keke to audition for an on-air radio job. A male acquaintance advises: “Dress sexy, be confident, smell nice, and if you are offered something to drink, ask for water first....If they insist, ask for something foreign and healthy, like green tea.” Keke isn’t chosen but leverages a position anyway by trading sex and plying her encyclopedic knowledge of Luke’s and Matthew’s Gospels. Thus begins her rise in Christian radio. Sex—often predatory—forms and deforms all four siblings; the novel features several rapes. Chapters alternate in each sibling’s voice over a stretch of 20 years. The brothers grow up and move to Chicago and out of the story. Abraham stuffs her novel past brimming, but its sophisticated structure and propulsive narration allow her to tuck in a biting critique of corrupt colonial religion and universally exploitative men. “It was fortunate to be beautiful and desired,” says Bibike, whose voice opens the story. “It made people smile at me. I was used to strangers wishing me well. But what is a girl’s beauty, but a man’s promise of reward?” Bibike eventually becomes a healer who cherishes their Yoruba grandmother while Keke, the wife of a powerful and monstrous pastor, tastes ashes—the source of the novel’s title.

Twin sisters cut adrift in a perilous, duplicitous world learn that “only the wise survive.” A formidable debut.