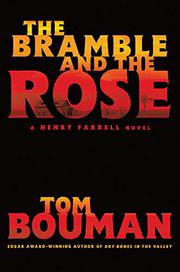 THE BRAMBLE AND THE ROSE

A macabre murder is subordinate to a police officer’s other concerns.

Officer Henry Farrell is a native of Wild Thyme, a small town in the Endless Mountains of northeastern Pennsylvania, a region of great natural beauty whose denizens depend on struggling dairy farms, logging, stonecutting, and, more recently, fracking; there's also been an influx of outsiders, some of them drug dealers, meth cookers, and grifters (Fateful Mornings, 2017, etc.). When Terry Ceallaigh (pronounced "Kelly") reports finding a badly mauled, headless body in the woods, it at first appears to have been the casualty of a bear attack. But further investigation and the discovery of the head indicate murder followed by mauling by an opportunistic bear, which must be killed. Meanwhile, Henry is preparing for his second marriage; his fiancee, Miss Julie, is the daughter of wealthy parents, an EMT with some problems in her past. She knows that Henry’s first wife died tragically young but doesn’t know of the affair he had with Shelly Bray, who lost her children in the nasty divorce that followed. The wedding guests include Henry’s parents, with whom he has a rocky relationship, and his sister, Mag, and her kids, who decide to stay for a while after the celebration instead of heading home to North Carolina. While Henry and wildlife biologist Mary Weaver are hunting the bear, they’re attacked by a man with a knife. No one who worked with the dead man, who turns out to be Carl Dentry, a semiretired private investigator from the Harrisburg area, is willing to tell Henry anything, including what Dentry was doing in Wild Thyme. Then Shelly is murdered, and Henry is an obvious suspect. When his nephew Ryan vanishes, Henry takes to the woods, using every skill he learned as a young man and leaning on some lifelong friendships in an effort to find Ryan, save his marriage, and discover who killed Dentry and is gunning for him.

An elegant tale of an introspective detective whose life experiences have seared his soul without extinguishing his hope.