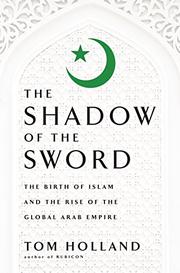 IN THE SHADOW OF THE SWORD

The Birth of Islam and the Rise of the Global Arab Empire
by Tom Holland
BUY NOW FROM
AMAZON
BARNES & NOBLE
LOCAL BOOKSELLER
GET WEEKLY BOOK RECOMMENDATIONS:

Elegant study of the roiling era of internecine religious rivalry and epic strife that saw the nation of Islam rise and conquer.

British historian Holland (The Forge of Christendom: The End of Days and the Epic Rise of the West, 2009, etc.) first tells the tortuously involved tale of the rise and fall Persia, or what he calls Iranshahr, an empire imbued by the spirit of the prophet Zoroaster, who believed that a terminal confrontation between good and evil was imminent; it was also heavily influenced by the Jews, natives of Judah in diaspora to Mesopotamia, who were at work transcribing the written record of their rabbis and looking forward to a Messiah who would offer redemption from suffering. Meanwhile, Rome, whose own Virgil had broadcast its glorious mission statement, “a dominion without limit,” in the Aeneid, was besieged by barbarian tribes and on its knees by the first centuries CE, threatened by an implacable rebellious heresy, Christianity. Yet another current began to swell, similarly foretold in the Old Testament scriptures, such as in the account of Abraham’s begetting a son by the Egyptian maid Hagar, who would become Ishmael, heir to a great people, and Daniel’s terrifying apocalyptic vision of four beasts ruling in succession over mankind. So what was this new nation rising from the feral wanderings of “the wolves of Arabia,” seemingly portended in the bubonic plague decimating the Fertile Crescent in the sixth century? Holland portrays the age as ripe for the revolutionary visions of the Prophet, who certainly drew most self-consciously from tenets of previous People of the Book. Holland confronts questions in the Quranic text head-on, providing a substantive, fluent exegesis on the original documents.

THE HISTORIES
by Herodotus
Nonfiction

SLAVE OF MY THIRST
by Tom Holland

THE BIRTH OF THE WEST
by Paul Collins
Indie

IN SEARCH OF GOD
by Mohamed Gad
Nonfiction

AFTER THE PROPHET
by Lesley Hazleton
Nonfiction