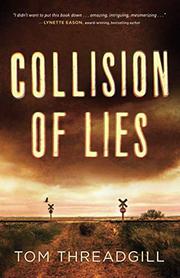 Threadgill (Dead of Winter, 2019, etc.) plunges a detective from the San Antonio Property Crimes Division into a deep-laid plot involving murder, kidnapping, and myriad other crimes above her pay grade.

Sure, Amara Alvarez would love to work for Homicide, but she doesn’t expect that to happen any time soon—not even after Marisa Reyes, whose 6-year-old son, Benjamin, was killed three years ago when his bus was struck by a freight train in a crash that left 17 schoolchildren and three other victims dead, gets a text message from Benjamin that says: “Help me, Mom.” Enzo Reyes keeps telling his wife that there must be some mistake, and none of the scant evidence Amara turns up gives any reason to hope, but Marisa is convinced that her boy is still alive. And her unwavering faith is seconded from an unexpected quarter when Daniella Delacruz, whose daughter Caterina was another victim of the collision, finds a note on her car’s windshield that says simply, “I’m sorry.” Odds are that the note was left by somebody who cut her off in traffic or nearly hit her car. But Amara’s sufficiently struck by the coincidence to dig deeper, especially when she realizes that Philip Dragan, one of two victims in a very contemporary double murder, was the man who told Daniella Delacruz he was sorry and that the forensic evidence in the three-year-old case strongly suggests that Marisa Reyes is on to something. That’s enough to pull her away from her latest case in Property Crimes—a series of nearly a dozen robberies by someone whose real goal wasn’t to take anything but to leave something behind—and get her assigned to a coveted spot helping the FBI. The closing movement doesn’t maintain the level of the buildup, but readers will root for Amara to get promoted to Homicide in the inevitable sequel.

No sex or cussing; just some truly horrifying crimes of violence, greed, and corruption.