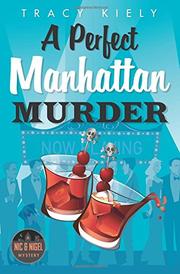 A modern-day Nick and Nora Charles take their skills in sleuthing and repartee to the New York theater district.

Together with their bull mastiff, Skippy, who’s at least 10 times larger than Asta, Nic and Nigel Martini make the trek from California to New York to see the opening of a play written by Nic’s college friend Peggy McGrath. Dinner with her other college friend, wealthy, lovely new mom Harper, would be delightful except for the presence of Harper’s obnoxious husband, Dan Trados, a name-dropping, social-climbing theater critic. Unhappy Harper would like a divorce, but since she ignored her father’s suggestion and didn’t make her bridegroom sign a prenup, Dan would walk away with a fortune. After the play, they all adjourn to the magnificent apartment of producer Fletcher Levin, who has a vast fortune, a rocky reputation, and a penchant for very young girls. Nic and Nigel meet the cast and crew, and Nic quickly picks up a lot of undercurrents and not a lot of love for Dan. When he’s duly found dead, the police, in the person of Nic’s partner from her days as an NYPD detective, suspect foul play. Since Harper is naturally high on the suspect list, Nic, Nigel, and Skippy start sleuthing. A surfeit of suspects makes the task daunting, but Nic’s taste in fiction helps her solve the crime.

It’s impossible to resist Kiely’s charming trio of husband, wife, and dog (Killer Cocktail, 2016, etc.). The manner is effervescent and amusing, and the mystery surprisingly good.

MURDER WITH A TWIST
by Tracy Kiely
Mystery

MURDER ON THE BRIDE'S SIDE
by Tracy Kiely
Fiction

MURDER AT LONGBOURN
by Tracy Kiely

A CHRISTMAS PERIL
by J. A. Hennrikus
Mystery

RETURN OF THE THIN MAN
by Dashiell Hammett
Newsletter sign-up