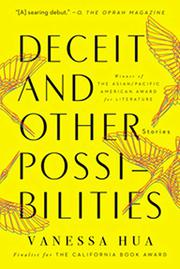 DECEIT AND OTHER POSSIBILITIES

Secrets and lies drive the protagonists to acts of desperation in Hua’s dazzling story collection, first published in 2016 and now reissued with an additional three tales.

Most of the 13 stories are set in the San Francisco Bay area and revolve around characters from the Asian and Mexican immigrant communities who are caught between the expectations of their ancestral homelands and the promise of America. “My parents adhered to strict Chinese traditions that we learned to circumvent,” says Calvin, a closeted engineer who is spending a romantic weekend at a B&B with his lover, Peter, in “The Responsibility of Deceit.” For years, he and his sister “shared the responsibility of deceit, the big and little secrets that oiled the machinery of family expectations.” But when friends of his parents walk into the dining room at breakfast, does Calvin have the courage to risk his parents' alienation by revealing his true self? In “Accepted,” a darkly funny twist on the well-worn myth of the model minority, the pressure of filial piety propels the increasingly bizarre actions of Elaine Park, who pretends to be a Stanford University student to avoid disappointing her self-sacrificing family. Parents also deceive their children; in the moving “What We Have Is What We Need,” the young son of undocumented Mexican immigrants discovers that his unfaithful mother has been leading “an alternate existence, happier than what she was born to.” Hua writes with tenderness, humor, and empathy, imbuing her stories with lovely turns of phrase (“she had an eye for the fleeting”). Only “Line, Please,” about a Hong Kong movie star fleeing a sex-photo scandal, strikes a slightly dated and false note given the city’s current political turmoil.

A RIVER OF STARS
by Vanessa Hua
Fiction