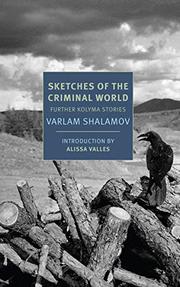 SKETCHES OF THE CRIMINAL WORLD

Building on his Kolyma Stories (2018), one-time prisoner Shalamov limns the hell that was the Soviet gulag.

The stories gathered here, apparently reportage with a light veneer of fiction to disguise names, open with their author chiding himself for being “thrilled by the ‘heroic’ figures of the criminal world,” adulation befitting an impressionable teenager. For, as Shalamov (1907-1982) writes, there really were criminals in the gulag, not just blameless victims of Stalin. At the head of the hierarchy were the “hereditary thieves,” those who knew no other way than robbery—and who were not to be confused with the amateurs who swelled the ranks of the criminal class following the “dekulakization” of the 1930s. The professionals wield tremendous power: In one of Shalamov’s tales, they threaten the head medical officer at a mine where one of their “godfathers” had been sent with unspecified violence while promising him two suits of clothing if he arranges for a transfer to “a thieves’ place, the Northern Administration.” Indeed, apart from the criminals, many of the figures whom Shalamov profiles are the doctors, nurses, and paramedics who serve the camps, often as inmates themselves; the prisoners tend to make little distinction over titles, so long as they can get a little medicine and perhaps a little time off in the clinic, and even the captors who administer the prison system prefer those doctors to the ones on the outside. There are fascinating sociological side notes, such as the odd fact that the “murderers or thieves” among the gulag’s denizens were fond of the poetry of Sergei Yesenin, “the only poet who was accepted and consecrated by the criminals, who generally altogether disliked poetry.” As in his earlier volume, Shalamov writes matter-of-factly, unblinkingly, about the endless horrors of the gulag, which are scarcely comprehensible.

Essential chronicles of the worst face of the totalitarian state.