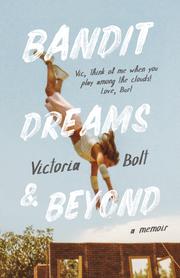 Bolt’s debut memoir captures the life and loves of a woman who set off to Hollywood with a dream to meet Burt Reynolds and became a stuntwoman.

In Decatur, Illinois, “The Soybean Capital of the World,” a young Bolt struggled after her parents’ divorce. As she came of age, she began to learn how to take care of herself due to her father’s quick temper and her mother’s mental illness. While living with her dad and frequenting Decatur’s pubs alongside him, the junior high schooler became attracted to his adult friend Jerry. Bolt’s narration goes on to reflect her development from a sharp yet naïve child to a rebellious, stubborn teen. A high school dropout at 16, Bolt succeeded at driving solo to California with nothing but a borrowed Eagles eight-track tape, a giant stuffed frog, and $250 in her pocket. She worked the graveyard shift at a 7-Eleven to take advantage of opportunities as a movie extra during the day. Along the way, Bolt navigated the seedy world of auditions, headshots, and casting scams but ended up discovering a passion for stunts. Driven by a dream to star in a movie with movie star Reynolds, Bolt dexterously juggled her priorities while also figuring out where she stood when it came to her impassioned relationship with a married cop. In this debut memoir, Bolt offers a poignant, dynamic, and charming tale of love. As it rolls along, she offers anecdotes that may make some readers nostalgic for the Hollywood of decades past. At one point, she points out that her third grade teacher wrote on the girl’s report card, “Catches on slowly, but then understands well,” which will also likely apply to readers of the memoir, as paragraph by paragraph, the author’s narrative threads don’t seem to immediately and obviously tie together. But although her tales seem a tad disjointed at times, they do satisfyingly weave themselves together in the end. (Includes black-and-white and color family photos.)