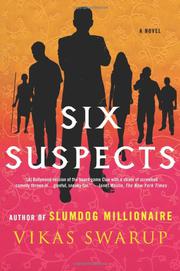 The author of Q&A (2005), the novel that became the film Slumdog Millionaire, returns with an equally high-concept tale that uses a murder investigation to launch a riotous tour of contemporary India.

After several years of legal proceedings, Vivek (Vicky) Rai is finally acquitted of a murder he undoubtedly committed. His father Jagannath, Home Minister of Uttar Pradash, throws him the party to end all parties—at which Vicky is shot dead. The Delhi police identify six suspects: corrupt womanizer Mohan Kumar; Shabnam Saxena, a sizzling actress Vicky had been pursuing; Hollywood adult-film producer Rick Myers; cell-phone thief Munna Mobile; Eketi Onge, member of a vanishing tribe from an island in the Bay of Bengal; and Jagannath Rai himself. As their back stories reveal, each had a powerful motive for wanting Vicky dead. But those back stories serve mainly as pretexts for a series of fantastical adventures that have little to do with the question of who killed Vicky. Munna, whose experiences most closely recall those of Ram in Q&A, hurtles from rags to riches, from impossible love to intolerable pressure. Tribesman Eketi, pursuing a totemic stone stolen from his people, is by turns befriended and exploited by a series of heartless manipulators before finding his ideal in Munna’s sister Champi. An American Candide (later linked to the murder investigation) flies to India in search of his mail-order bride, gets fleeced and ensnared in terrorism, then is placed in the Witness Protection Program. Shabnam Saxena grooms a destitute supplicant to be her professional double, with predictable results (think All About Eve with a vengeance). And the ruthless public officials of Uttar Pradash struggle to outdo each other in their zestful search for more money and power. Along the way, a hundred walk-on characters flare to vivid life, then vanish in the rearview mirror to make way for others equally memorable.

Despite some inevitable repetition and a gimmicky frame, a teeming, beguiling Indian panorama wrapped in a clever whodunit.