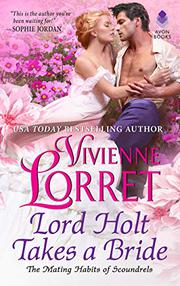 Winnifred Humphries can’t bring herself to marry the awful man her father has selected for her, so she leaves him at the altar and climbs into a carriage with a man she believes to be her friend Jane’s cousin. But, as Winn discovers too late, he’s not Jane’s cousin; he’s actually Lord Asher Holt, whom her friends accidentally kidnapped and robbed in the name of research the week before. Asher just wants his money back so he can finally get away from his greedy father, but the situation spirals, and both of them need to leave London as quickly as possible. Though they expect to be parted after just a few days, when they reach Winn’s aunt’s house, the intimacy of their travel ignites a fierce chemistry, and it’s strong enough that they are easily able to pose as a married couple. After they finally admit that they don’t want to be parted, a series of misunderstandings and maliciousness on Asher’s father’s part threaten to part them permanently—unless Asher can get one more chance to talk to Winn. The first book in Lorret’s The Mating Habits of Scoundrels trilogy is convoluted at times, but readers will be pleased to see that Asher is less of a scoundrel than he initially appears. Given that Winn and her friends are ostensibly writing a book about scoundrels—hence the accidental kidnapping—this is unfortunate for their purposes, but that’s a fairly minor subplot anyway. A more charming subplot, a possible second-chance romance between Winn’s parents, adds a pleasing depth to the story, reminiscent of Eloisa James. Readers will also be grateful for the constant rain showers of England, which create several steamy opportunities for Winn and Asher to get out of their clothing to dry off and get close to stay warm. Though there aren’t many surprises in the story, Lorret (The Rogue To Ruin, 2019, etc.) does execute a historical romance well, and readers will look forward to learning more about Winn’s friends Jane and Ellie in future installments.

A solid Regency romance and promising start to a new series.

THE ROGUE TO RUIN
by Vivienne Lorret
Fiction

HOW TO FORGET A DUKE
by Vivienne Lorret
Fiction

A CHRISTMAS TO REMEMBER
by Lisa Kleypas
Newsletter sign-up