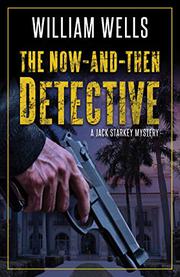 His third case pulls former Chicago cop Jack Starkey, mostly retired to Fort Myers, out of the Sunshine State back to his old stomping grounds and far beyond.

The people who knew old Henry Wilberforce back in Chicago didn’t think of him as a grocery-firm billionaire but as a generous, lovable oddball who shopped at supermarkets for strangers and still talked to his dog years after he’d died. But someone must have had it in for Henry, because he was murdered as he slept in his winter home in Naples. Naturally, Naples police chief Tom Sullivan reaches out to Jack (The Dollar-a-Year Detective, 2018, etc.) for help. Even though Henry’s left all his money to his charitable trust, the prime suspects are Nelson "Scooter" Lowry, his trust-fund nephew in Santa Monica; his socialite nieces, June Dumont and Libby Leverton; and their well-connected husbands, Washington attorney Alan Dumont and Boston developer Stewart Leverton. So after taking his affectionate leave of Fort Myers realtor Marisa Fernandez de Lopez and stopping off in the Windy City just long enough to eye the snow, refresh his appetite for the local sandwiches, and get the non-heirs’ addresses, Jack flies to LA, D.C., and Boston on the improbable grounds that he’ll learn something important from the looks in the relatives’ eyes when he tells them that the uncle they haven’t seen in years is not only dead, but murdered. Spoiler alert: He doesn’t. So he starts all over again, not by casting a wider net, but by making another round of trips to the relatives, who welcome him about as eagerly as you’d welcome most uninvited and unexpected guests. Jack finds their behavior so suspicious that he zeroes in on one of them, baits a trap with a young police officer hungry for promotion, and watches in satisfaction as the trap springs shut. Finis.