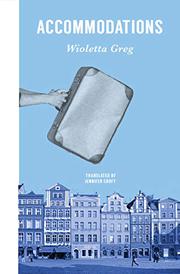 Greg’s (Swallowing Mercury, 2017, etc.) second autobiographical novel picks up where her first one left off. Wiola, her young protagonist, leaves the remote Polish farm where she’s grown up and arrives in Częstochowa, a nearby city, to pursue college. The slim book is light on details regarding college itself. Instead, Greg focuses on the incidental conversations Wiola has with the various people she encounters. Her living situation is somewhat precarious—she stays, first, at a workers’ residence, then at a convent—so she has all sorts of conversations with all sorts of people. It’s 1994, and the Soviet Union has collapsed, but World War II is still fresh in many people’s minds. Wiola meets a woman who describes how German soldiers destroyed her family. “I began to hear gunfire coming from Warsaw Street,” she says, “and then they came for us.” But most of Wiola’s encounters are far more mundane than this one. A florist at the market laments the rising cost of vodka (“I hate to think what’s next!”), and a sketchy character called Scurvy tells Wiola about his time in prison. Unlike Swallowing Mercury, this novel focuses primarily on the external—what Wiola sees as she walks about the city, what she hears—rather than her inner thoughts. Greg’s prose is pristine, each image crystalline in its clarity, but this is not a novel that covers large distances. By the end, Wiola has certainly traveled beyond her beginnings, but it takes subtlety to understand just how far she’s gone.

Jewellike in its intensity, Greg’s latest novel is a strong follow-up to her first.