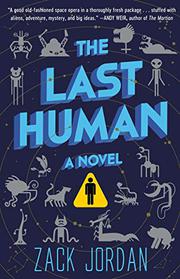 Jordan’s ambitious debut novel is an epic science-fiction adventure that chronicles the journey of an orphaned Human girl—believed to be the last member of an extinct species—from interstellar pariah to potential savior of her infamous race.

Sarya the Daughter lives with her adopted mother, Shenya the Widow—a giant, spiderlike “apex predator…wrapped in lightning and darkness”—on an orbital water-mining station in the rings of a giant gaseous planet. As a citizen of the Network, a vast accumulation of intelligence consisting of millions of species that has enabled faster-than-light travel and prevented conflict for a half-billion years, Shenya has protected Sarya and lied about her true identity: She is a Human, the one race destroyed by the Network because of its destructive tendencies. But when a bounty hunter attempts to abduct Sarya and her home is destroyed, the little Human finds herself on the run and all alone in a universe inhabited by godlike intelligences who may be using her as a pawn in a much deeper game. As she learns more about her race’s tumultuous relationship with the Network, she begins to realize that even one small, moderately intelligent bipedal being can make a difference, even when it involves conflicts with godlike entities. The sheer scope of the story is noteworthy, from the various intelligence tiers, which include groupminds and sentient planets, to the colossal settings (orbital stations, spaceships, the end of the universe, etc.). The theme of free will also packs a powerful punch. But while the grand-scale premise of the narrative is laudable, the story gets unwieldy in places, and the momentum suffers. Additionally, Sarya—while an intriguing character—never becomes fully three-dimensional, and the emotional impact of her journey feels muted and detached, overshadowed by the massiveness of the story unfolding around her.

A flawed but satisfying SF adventure that is, at times, mind-blowing.

A DEEPNESS IN THE SKY
by Vernor Vinge
Fiction

A FIRE UPON THE DEEP
by Vernor Vinge
Fiction

THE CHILDREN OF THE SKY
by Vernor Vinge
Indie