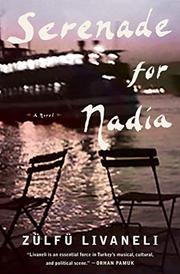 Turkish writer and political activist Livaneli (Bliss, 2006, etc.) uses the story of a modern Turkish woman’s relationship with an aged professor from America to delve into ugly truths about Turkey’s past.

The plot is a cerebral, low-wattage academic thriller. In 2001, 36-year-old Maya Duran, a divorced single mother who works at Istanbul University, is assigned to entertain 87-year-old visiting Harvard professor Max Wagner. Then government agents try to coerce Maya into keeping tabs on Max, who was born in Germany and lived in Turkey from 1939 to '42. Instead, she and her computer-nerd son, Kerem, begin researching Max to learn what secrets the agents fear he might expose. Meanwhile, she grapples with two secrets closer to home: Her paternal grandmother was an Armenian whose parents were massacred, and her maternal grandmother’s family was massacred for being Crimean Turks. Sharing an intense, platonic intimacy with Maya, Max (not himself Jewish) lovingly describes his love for his Jewish wife, Nadia, and her tragic death in what Maya herself calls a “separate section of my book.” Through Max’s story, Livaneli recounts a little-known actual World War II tragedy. In 1941, 769 Romanian Jewish refugees traveled on an ill-equipped ship bound for Palestine. The unseaworthy Struma reached Istanbul, where it sat for 71 day before Turkey—in collusion with Britain, which did not want the refugees to reach Palestine—had the ship with its broken engine hauled out to sea, where a Russian submarine torpedoed it. One passenger survived. Livaneli’s telling is heartbreakingly vivid, his despair over the potential for human and governmental cruelty deeply felt. In contrast, the fictional characters, particularly Maya, remain more strategic than emotionally engaging. Maya is too obviously mouthing the author’s arguments, dropping too many philosophers’ names along the way, and her narrative voice, at least in this translation, remains oddly cerebral even when she discusses her love life and her son. Yet Livaneli’s passion in exposing Turkey's and the West’s culpability in real massacres is eloquent enough to override his ho-hum fictional narrative.

A book that is hard to get through yet hard to forget.