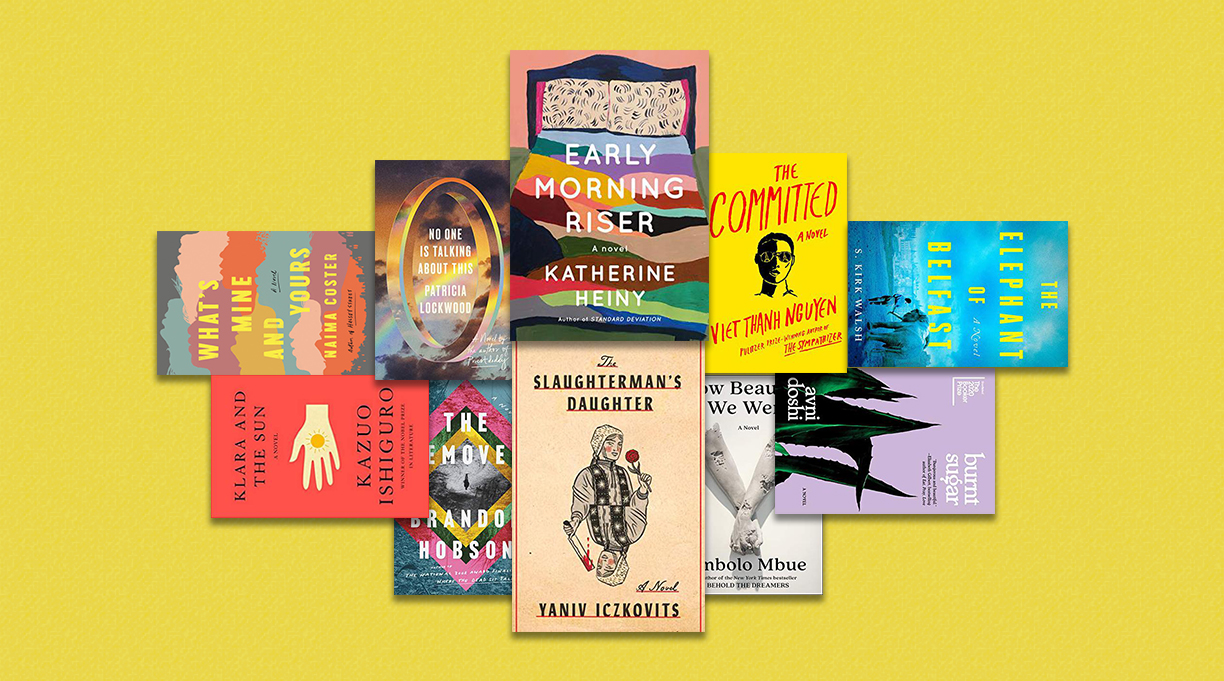 We all know a new year is just a random marker in time, but I can’t help feeling hopeful as we enter 2021. Perhaps we’ll all have a little more brain space to devote to reading fiction—and there are a lot of exciting books to look forward to.

Burnt Sugar by Avni Doshi (Overlook, Jan. 26): U.S. readers have been eagerly awaiting the publication of this debut novel since it was shortlisted for the Booker Prize in September. Set in Pune, India, it explores the complex bond between a neglectful mother and the daughter whose life is entwined with hers. “A landmark portrait of toxic parenting and its tangled aftermath,” says our starred review.

The Removed by Brandon Hobson (Ecco, Feb. 16): Like Hobson’s last novel, Where the Dead Sit Talking—a finalist for the National Book Award in 2018—this new book features a Cherokee boy who’s placed with a foster family, in this case the Echotas, whose middle child was killed by a policeman 15 years earlier. Our starred review says, “A slim yet wise novel boils profound questions down to its final word: ‘Home.’ ”

No One Is Talking About This by Patricia Lockwood (Riverhead, Feb. 16): Known for her poetry as well as her memoir, Priestdaddy (2017), a Kirkus Prize finalist, Lockwood’s first novel is about a nameless woman exploring “the difference between the life that she chooses online and the life that comes crashing in on her,” as our starred review says. “An insightful—frequently funny, often devastating—meditation on human existence.”

The Slaughterman’s Daughter by Yaniv Iczkovits (Pantheon, Feb. 23): It’s the late 19th century in czarist Russia. A Jewish man has abandoned his shtetl, leaving his wife and children behind. The daughter of the title is his unconventional sister-in-law, who takes off after him, determined to bring him home. Listen to our starred review: “Occasionally a book comes along so fresh, strange, and original that it seems peerless, utterly unprecedented. This is one of those books.”

What’s Mine and Yours by Naima Coster (Grand Central, March 2): Coster’s first novel, Halsey Street, was a finalist for the 2018 Kirkus Prize. Her new novel tells the story of two North Carolina families bound by trauma and love over the course of three decades, creating characters of real depth. Our starred review calls it “tender but—miraculously—never sentimental.”

Klara and the Sun by Kazuo Ishiguro (Knopf, March 2): In his first novel since winning the Nobel Prize, Ishiguro returns to the dystopian tone of Never Let Me Go (2005). Klara is an “Artificial Friend” who goes home with a mysteriously sick girl named Josie. Is she being groomed as a surrogate daughter in case Josie dies? Our starred review calls it “a haunting fable of a lonely, moribund world that is entirely too plausible.”

The Committed by Viet Thanh Nguyen (Grove, March 2): The spy from Nguyen’s Pulitzer Prize–winning The Sympathizer (2015) goes to Paris in 1981, pondering philosophy while working for a drug kingpin. Our starred review calls it “a quirky intellectual crime story that highlights the Vietnam War’s complex legacy.”

How Beautiful We Were by Imbolo Mbue (Random House, March 9): Mbue’s first novel, Behold the Dreamers (2016), was a vivid portrait of a bustling New York that seems very far away right now. In her new novel, she depicts an African village being slowly devastated by an American oil company. “Among the many virtues of Mbue’s novel is the way it uses an ecological nightmare to frame a vivid and stirring picture of human beings’ asserting their value to the world, whether the world cares about them or not,” according to our starred review.

The Elephant of Belfast by S. Kirk Walsh (Counterpoint, April 6): Based on a true story of World War II, this debut novel introduces a zookeeper in Northern Ireland who becomes so attached to an elephant in her charge that she hides it in her house during the Luftwaffe bombing of Belfast. “The concept sounds whimsical, but this is not a light or frivolous novel,” says our review. “A fresh perspective on painful losses during wartime.”

Early Morning Riser by Katherine Heiny (Knopf, April 13): Like Anne Tyler or Laurie Colwin, Heiny is known for charm; as our starred review says, “It’s easy to adore the characters Heiny conjures in her novels and short stories. They tend to be quirky and smart, caring and passionate.” Her latest follows a Michigan couple over the course of 17 years, and it “finds beauty and humor in connection and community, family and friendship, and the way love can develop and deepen over time.”