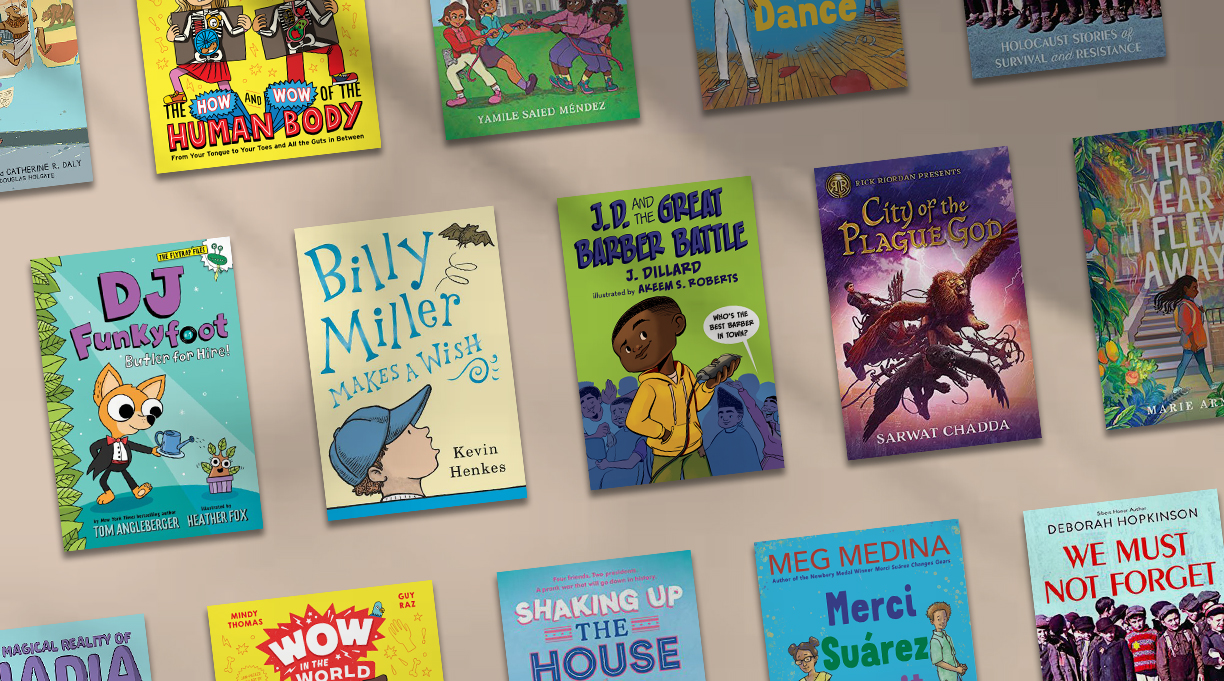 From presidential pets to compilations of little-known but entertaining facts, books about the White House and its inhabitants are perennially popular. Perfectly timed for the arrival of the new administration, Shaking Up the House by Yamile Saied Méndez (HarperCollins, Jan. 5) follows the hilarious antics of four girls who take practical jokes to a new level: Winnie and Ingrid, daughters of outgoing President López, and twins Zora and Skylar Williams, whose mother will be the first Black woman president.

The ancient Mesopotamian god Nergal has it in for New York City in City of the Plague God by Sarwat Chadda (Rick Riordan Presents/Disney, Jan. 12). Thirteen-year-old Sik Aziz, whose parents run a deli where he helps out after school, gets caught up in a devastating plague—a plot point that will resonate especially strongly with today’s young readers. The Iraqi American Muslim teen gets help from the goddess Ishtar, her daughter, and the legendary Gilgamesh himself in a rollicking adventure inspired by epic stories.

In The Year I Flew Away by Marie Arnold (Versify/HMH, Feb. 2), 10-year-old Gabrielle travels on her own from Haiti to Brooklyn to live with her uncle and his family. Adjusting to a new country and coping with homesickness are hard, and the witch Lady Lydia tries to tempt Gabrielle with an offer of three wishes: If she wants, she can wish away all the hard parts and assimilate—but the price will be high. This is an original blend of magic and realistic fiction, a heartfelt tale that offers a new spin on immigrant stories.

We Must Not Forget: Holocaust Stories of Survival and Resistance by noted author of history and historical fiction for young people Deborah Hopkinson (Scholastic Focus, Feb. 2) offers readers the gift of stories from people who lived through the Holocaust as children and teens. Through a combination of carefully chosen facts, moving photographs, and—most memorably—the words of the subjects themselves, this book is a testament to courage, compassion, and human endurance that deserves to be widely read.

Known as the “Egyptian Jon Stewart,” comedian Bassem Youssef fled his home country for fear of political persecution and has moved to the United States. In The Magical Reality of Nadia, co-written with Catherine R. Daley and illustrated by Douglas Holgate (Scholastic, Feb 2), Youssef turns his hand to light middle-grade fantasy. It’s the story of Egyptian American immigrant Nadia, a fact-collecting sixth grader who finds herself navigating bullying, microaggressions, and the ups and downs of friendship with a little magical help.

“Barberpreneur” J. Dillard joins forces with illustrator Akeem S. Roberts to introduce J.D., a Black 10-year-old in Meridian, Mississippi, who discovers he has a gift when he takes his mama’s clippers to his own hair. Much like the author, he turns this talent into a business in series opener J.D. and the Great Barber Battle (Kokila, Feb. 23)—but will Henry Jr., formerly Meridian’s only barber, allow himself to be upstaged by a third grader?

With The How and Wow of the Human Body (HMH, March 2), Mindy Thomas and Guy Raz bring the energy of their popular podcast, Wow in the World, to print with some help from illustrator Jack Teagle. Their breezy look at human anatomy covers such critical middle-grade territory as boogers, poop, pee, mucus, and farts while also providing solid information on the various systems that make us go. Between the jokes and the experiments, Thomas and Raz will keep their readers busy.

Together with illustrator Heather Fox, Tom Angleberger expands the world of his popular Flytrap Files series with Butler for Hire! (Amulet/Abrams, March 30), the first in his new DJ Funkyfoot series of chapter books. The freelance butler, a genteel Chihuahua, is all too accustomed to phone calls from people hoping for, well, a DJ, so even though his new client is really after a nanny, he takes the job—finding himself now in the service of ShrubBaby, the Adorable Baby Shrub. (Yes, that’s an anthropomorphic bush. This is Tom Angleberger, after all.)

Looking ahead to spring, Kevin Henkes follows up his Newbery Honor–winning The Year of Billy Miller (Greenwillow, 2013) with Billy Miller Makes a Wish (Greenwillow, April 6). Having survived his second grade year, Billy begins his summer with an eighth-birthday wish for excitement—that he almost immediately regrets when an ambulance pulls up, siren wailing, at the neighbor’s house. Readers who fell in love with the dreamy little White boy will be eager to spend more time with him.

And Merci Suárez Can’t Dance by Meg Medina (Candlewick, April 6) is the much-anticipated sequel to Merci Suárez Changes Gears (2018), which was a finalist for the Kirkus Prize and won the Newbery Medal. The Cuban American seventh grader continues to navigate the ups and downs of the private school where she is a scholarship student as well as changes in her relationship with her beloved grandfather who is struggling with Alzheimer’s. And to top it all off, dance-averse Merci is in charge of planning the school ball.