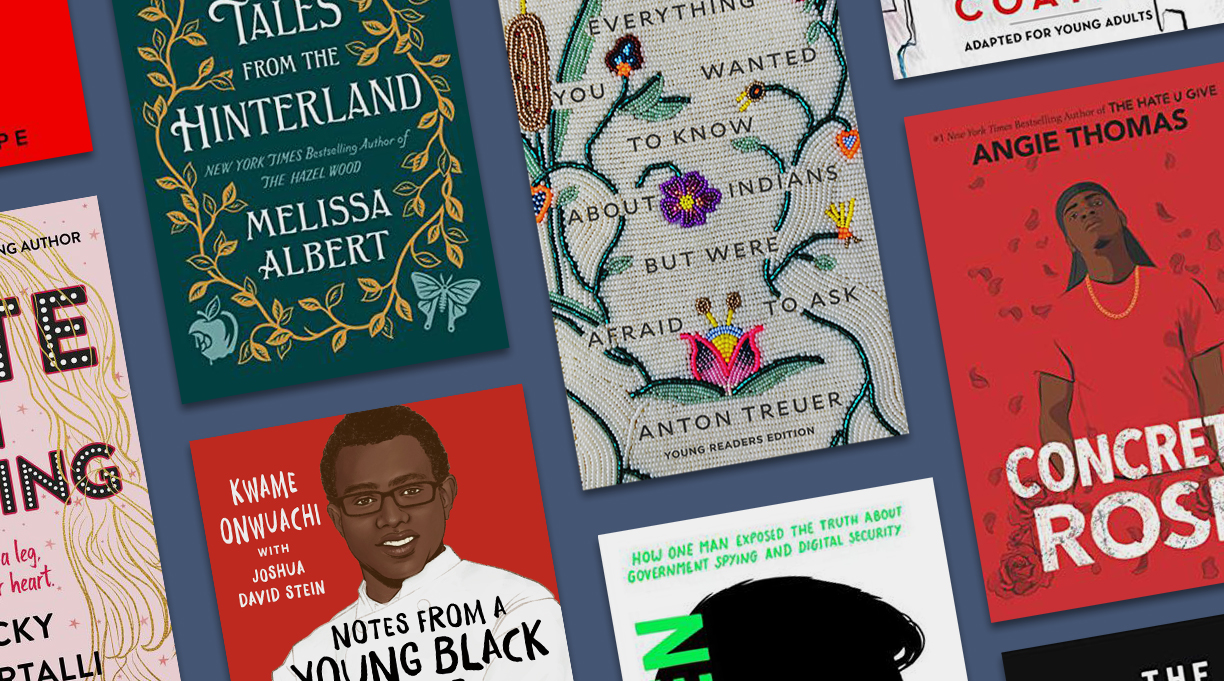 We can hope that 2021 signals the beginning of better times, but one thing is for certain: We’ve got some great titles for teens coming our way. With so many riches to choose from, here are 10 books out early this year to pay special attention to.

Several popular authors have new releases that revisit beloved worlds or deliver the kinds of stories their fans enjoy.

The Hazel Wood series—The Hazel Wood (2018) and The Night Country (2020)—has attracted legions of followers, and with good reason. These hypnotically dark and alluring fantasies center on characters from a volume of feminist fairy tales written by Althea Proserpine, grandmother of the protagonist, Alice. Now we get to read the fairy tales themselves in Tales From the Hinterland by Melissa Albert, adorned with striking illustrations by Jim Tierney (Flatiron Books, Jan. 12). This is a book for Hinterland fans to dive into and relish.

Concrete Rose (Balzer + Bray/HarperCollins, Jan. 12) is Angie Thomas’ prequel to her phenomenal debut, The Hate U Give (2017), which told the story of teenager Starr Carter, who moved between her predominantly Black neighborhood and her predominantly White private school. This title, set years earlier in the same neighborhood of Garden Heights, focuses on Starr’s parents, Maverick and Lisa, when they were teens themselves. The added layers of insight and emotion extend this fictional world in meaningful ways.

Kate in Waiting (Balzer + Bray/HarperCollins, April 20) offers rom-com readers exactly the sort of sweet, queer-friendly tale they have come to expect from Becky Albertalli, who charmed the YA world with her debut, Simon vs. the Homo Sapiens Agenda (2015). In her latest, BFFs Kate and Andy share a love of theater as well as a crush on the same guy from summer camp. Which was fine when it was all hypothetical, but now the object of their desire is going to their school, and things are getting complicated….

Readers looking for strong female role models are in luck with plenty of works to choose from.

Watch your screens for the Netflix adaptation of Tess Sharpe’s latest, The Girls I’ve Been (Putnam, Jan. 26)—but in the meantime, read the book! In a story our review calls a “captivating, explosive, and satisfyingly queer thriller,” Nora, her girlfriend, and her ex-boyfriend are taken hostage together during a bank robbery. In order to save them all, Nora, whose upbringing has been far from ordinary, must call upon the skills she developed as a child who was regularly forced to adopt new identities.

The Project by Courtney Summers (Wednesday Books, Feb. 2) taps into elements that made 2018’s Sadie a compelling breakout hit: It’s another gripping thriller featuring a strong girl determined to investigate a grave injustice and fight back against a world in which young women are vulnerable. The Unity Project masquerades as a benevolent, even charitable organization, but student journalist Lo is aware of its darker side after her sister gets sucked into what Lo realizes is a cult.

The impact of sexual assault on those surrounding the victim is the focus of Joy McCullough’s We Are the Ashes, We Are the Fire, illustrated by Maia Kobabe (Dutton, Feb. 9). As with her critically acclaimed Blood Water Paint (2018), about 17th-century Roman artist and rape survivor Artemisia Gentileschi, this title shines a powerful light on misogyny. After the man who raped Em’s sister is set free, she throws herself into writing about Marguerite de Bressieux, a medieval woman who revenged her brutalized family.

These days some of the very best adult nonfiction—groundbreaking works that truly need no introduction—is being skillfully adapted for younger readers.

The Beautiful Struggle (Adapted for Young Adults) by Ta-Nehisi Coates, illustrated by Jackie Aher (Delacorte, Jan. 12), is a deeply intimate memoir by the National Book Award–winning journalist about growing up in Baltimore as the sensitive, book-loving son of a father determined to guide his children toward something better.

Permanent Record (Young Readers Edition): How One Man Exposed the Truth About Government Spying and Digital Security by Edward Snowden (Henry Holt, Feb. 9) tells the riveting story of his transformation from loyal intelligence employee to a man driven by his conscience to take unprecedented steps.

Everything You Wanted To Know About Indians but Were Afraid To Ask (Young Readers Edition) by noted Ojibwe professor Anton Treuer (Levine Querido, April 6) is a thorough, engaging, and thought-provoking work that takes an unflinching look at and answers questions about issues affecting Native people today.

In Notes From a Young Black Chef (Adapted for Young Adults), written with Joshua David Stein (Delacorte, April 13), rising star Kwame Onwuachi shares his remarkable story, one that embodies perseverance as he moved from the Bronx to Nigeria to restaurants both humble and elite while overcoming many obstacles.