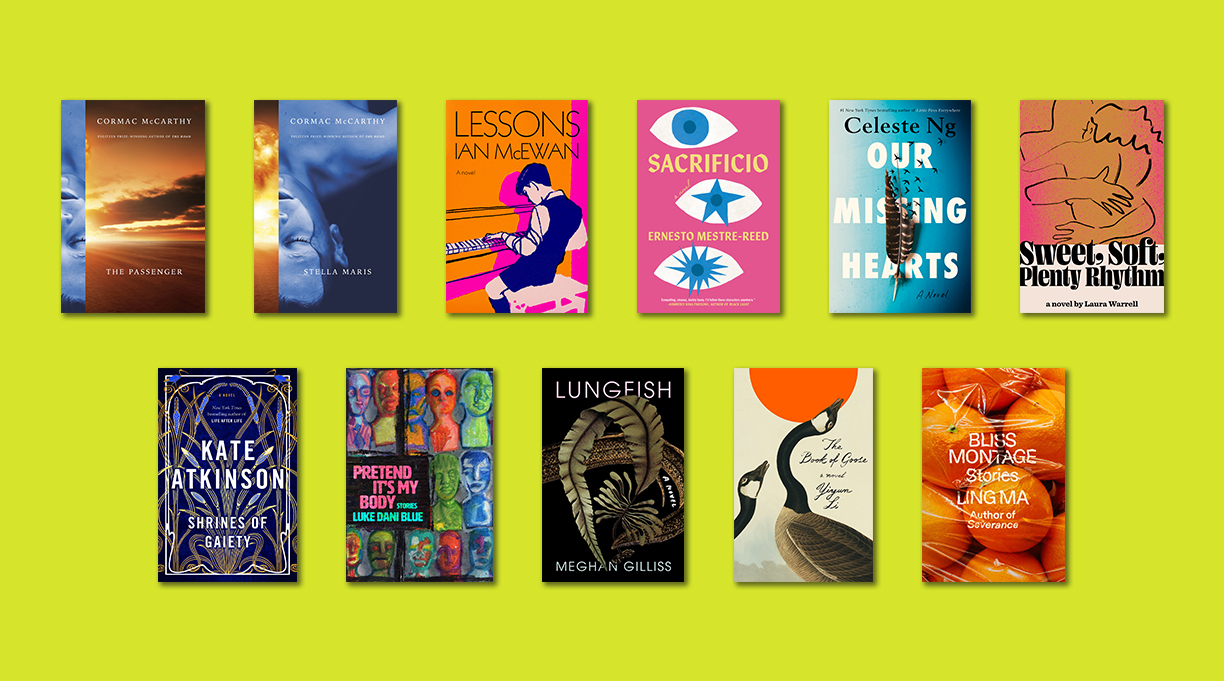 This fall, as always, the fiction shelves will be full of treats, ranging from surefire blockbusters to books that will need a boost to find their readers (those are the ones I love to push). For a start, check out some debut books from independent presses. Luke Dani Blue’s Pretend It’s My Body (Feminist Press, Oct. 18) is a highly original collection of stories about “characters on the brink of claiming new genders, sexualities, lifestyles, and even forms,” according to our review. In Meghan Gilliss’ Lungfish (Catapult, Sept. 13), a family in crisis sets off for an island in the Gulf of Maine; according to our review, “Gilliss is an extraordinary writer; passages…read like poetry, and others read like a lyric essay, making use of surprising juxtapositions and associations.”

Two debuts have music in their prose: Laura Warrell’s Sweet, Soft, Plenty Rhythm (Pantheon, Sept. 20) circles around jazz trumpeter Cyrus “Circus” Palmer and the women in his life. Our review says that “crucially, for a novel that takes its title from Jelly Roll Morton, [Warrell] knows how to write about the way it feels to deliver jazz—and receive it.” (Read our interview with Warrell.) The Family Izquierdo (Norton, Sept. 6), Rubén Degollado’s first book for adults, is a series of interlocking stories beginning in 1958 in McAllen, Texas, each told by a different character. Though most focus on the Izquierdo family, our review says that one is “less a story and more a letter to the Diocese of Brownsville that advocates canonizing the queen of Tejano music, Selena Quintanilla-Pérez; it’s a surprising delight.”

Following the success of Little Fires Everywhere (2017), Celeste Ng “conjures a dystopian near future in which art battles back against fear” in Our Missing Hearts (Penguin Press, Oct. 4), according to our review. Ernesto Mestre-Reed’s Sacrificio (Soho Press, Sept. 6) is a “compelling, melancholy novel” about Cuba in the 1990s. The Book of Goose by Yiyun Li (Farrar, Straus and Giroux, Sept. 20) is an Elena Ferrante–esque story of teenage girls in post­–World War II France, one of whom is educated and the other unschooled. Our review says, “Stunners: Li’s memorable duo, their lives, their losses.”

Moving back to 1926, we find Kate Atkinson’s Shrines of Gaiety (Doubleday, Sept. 27), set mostly in London’s Soho demimonde. At the center is Nellie Coker, who has six children and runs five nightclubs. Our review says, “The adjective Dickensian feels too clichéd to be meaningful, but Atkinson does excel at creating a big, bustling universe fully inhabited by vivid characters.…Already one of the best writers working, Atkinson just gets better and better.” Speaking of great British writers, Ian McEwan is back with Lessons (Knopf, Sept. 13), a decades-spanning story about a boy-then-man who lives what our review calls his “richly observed” life against the backdrop of the Suez Canal crisis, Chernobyl, 9/11, and Covid.

Ling Ma, who won the 2018 Kirkus Prize for fiction for her last book, Severance, returns with Bliss Montage (Farrar, Straus and Giroux, Sept. 13),a collection of “haunting and artful” short stories. “Ma uses elements of the fantastic but grounds them in a reality that is…recognizably our own,” according to our review.

Last but not least, and in perhaps the biggest literary news of the year, Cormac McCarthy will be publishing two new books this season. First up is The Passenger (Knopf, Oct. 25), which our review calls “a beguiling, surpassingly strange novel” about a man named Bobby Western who’s working as a salvage diver near New Orleans. Stella Maris (Knopf, Dec. 6) follows six weeks later and tells the story from the perspective of Bobby’s sister, Alicia, a mathematical genius who’s in a psychiatric hospital. “A grand puzzle, and grandly written at that, about shattered psyches and illicit dreams,” according to our review.