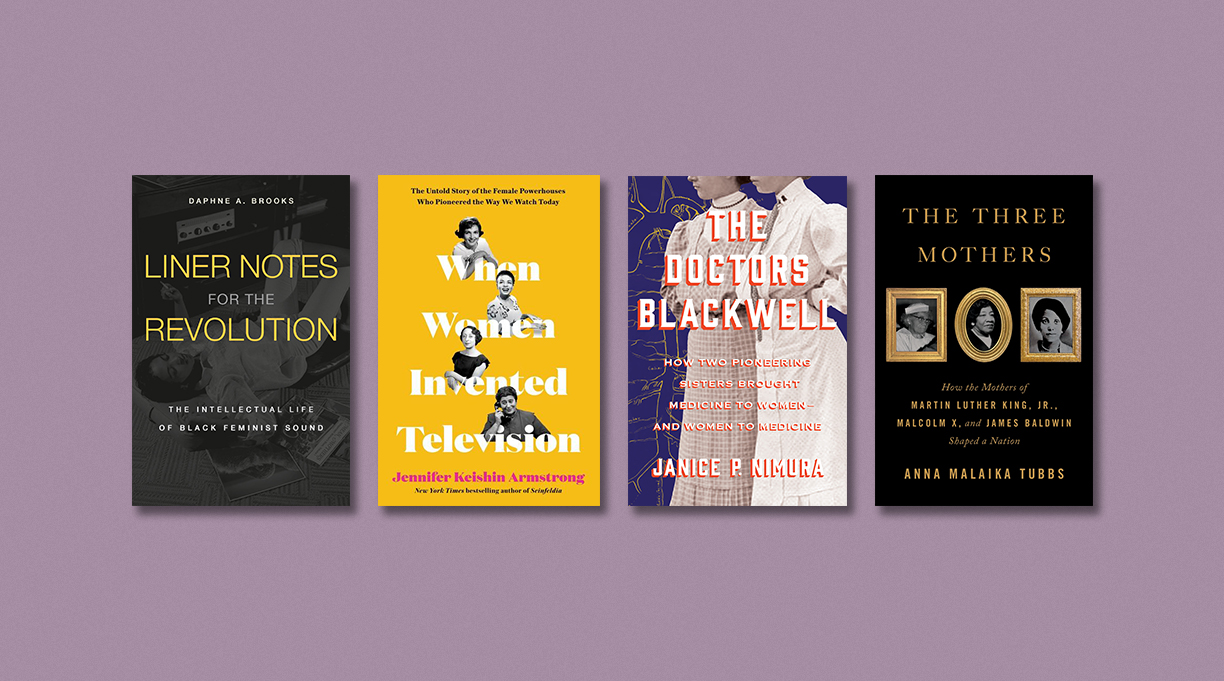 Girls may “run the world,” as Beyoncé so memorably put it, but all too often they do so behind the scenes; women’s accomplishments still don’t get the attention they deserve in the book world or any other quarter of the media. Women’s History Month was established in 1987 to draw more attention to the subject. (It was preceded, from 1982 to 1986, by Women’s History Week—enough said.) It’s a worthwhile prod for schools and libraries—and magazines like this one—to devote more time to women in history, but the idea that the subject deserves just one month of the year is, frankly, inadequate.

Janice P. Nimura’s The Doctors Blackwell: How Two Pioneering Sisters Brought Medicine to Women and Women to Medicine (Norton, Jan. 19) recounts the story of Elizabeth Blackwell, the first American woman to receive a medical degree (1849) and later the founder, with sister Emily (also a doctor), of the first hospital staffed exclusively by women. This book, which our reviewer calls a “riveting dual biography…that reads like a work of historical fiction,” sheds light on these trailblazers while rendering them as complicated, three-dimensional figures.

Among the many revelations of last year’s National Book Award–winning biography of Malcolm X, The Dead Are Arising, were the political beliefs and activism of Malcolm’s parents and their role in shaping his own. Now Louise Little shares the spotlight with Alberta King and Berdis Baldwin in The Three Mothers: How the Mothers of Martin Luther King, Jr., Malcolm X, and James Baldwin Shaped a Nation (Flatiron Books, Feb. 2). Author Anna Malaika Tubbs writes, with evident passion, “I am tired of Black women being hidden. I am tired of us not being recognized, I am tired of being erased.” In shining a spotlight on these three figures, Tubbs offers what our reviewer calls a “refreshing, well-researched contribution to Black women’s history.”

Black women in music—and the Black women critics who wrote about their work—are the subject of Daphne A. Brooks’ exciting critical study Liner Notes for the Revolution: The Intellectual Life of Black Feminist Sound (Belknap/Harvard Univ., Feb. 23). Among the artists discussed here: Ma Rainey, Nina Simone, Eartha Kitt, Odetta, Aretha Franklin, Whitney Houston, Lauryn Hill, and Beyoncé along with writers such as Zora Neale Hurston, Lorraine Hansberry, and jazz historian Rosetta Reitz. This is heady stuff from a professor of African American studies at Yale—densely academic in places yet always animated by sharp insights about Black music and Black feminism. Kirkus calls it a “sui generis and essential work on Black music culture.” Best of all, there’s a Spotify playlist to accompany it.

The title of Jennifer Keishin Armstrong’s new book is itself provocative: When Women Invented Television: The Untold Story of the Female Powerhouses Who Pioneered the Way We Watch Today (Harper/HarperCollins, March 23). The case Armstrong (Seinfeldia) makes is persuasive, as she examines the contributions of Gertrude Berg, creator of a popular radio series–turned­–TV comedy about a Jewish family in the Bronx; Irna Philips, who likewise shepherded the soap opera Guiding Light from radio to the small screen; Betty White (yes, that Betty White), who wrote, produced, and starred in her own talk show and comedy series before later fame; and Hazel Scott, a jazz pianist and civil rights activist who hosted an evening variety show but was blacklisted during the McCarthy era. Our reviewer calls it an “engaging and well-documented recognition of four women’s significant impact on the emerging TV medium.”

Now can we just agree to celebrate women’s history all year long?