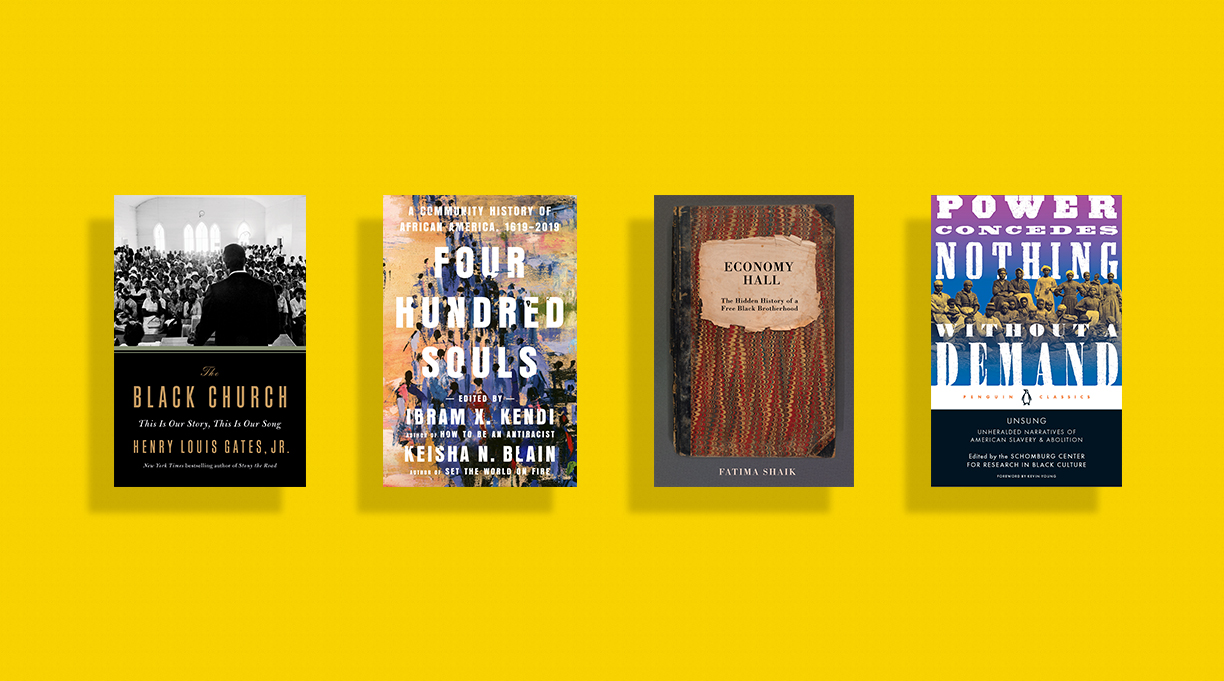 For centuries, Black history in America has been neglected, obscured, distorted, or simply erased despite the fact that the nation was built, quite literally, on the backs of Black slaves. While the historiographical struggle is far from complete, Black history is receiving long-overdue recognition as an essential component of American history as a whole. Here are four must-read books that will publish in February. Yes, it’s Black History Month, but these significant works deserve a wide audience any time of year—and for decades to come.

Four Hundred Souls: A Community History of African America, 1619-2019, edited by Ibram X. Kendi and Keisha N. Blain (One World/Random House, Feb. 2): Edited by award-winning historian Blain and prominent scholar Kendi (author of the modern classics How To Be an Antiracist and Stamped From the Beginning), this anthology brings together the voices of 80 contributors (historians, journalists, cultural critics, etc.) to tell the story of Black life in America over the past 400 years. Our starred review calls it “an impeccable, epic, essential vision of American history as a whole and a testament to the resilience of Black people.” With a contributors list that boasts Nikole Hannah-Jones, Alicia Garza, Ijeoma Oluo, Annette Gordon-Reed, Donna Brazile, Daina Ramey Berry, Imani Perry, Peniel Joseph, and Angela Y. Davis, few will have reason to quibble with that assessment.

Unsung: Unheralded Narratives of American Slavery Abolition, edited by Michelle D. Commander and the Schomburg Center for Research in Black Culture (Penguin Classics, Feb. 16): This welcome collection features the “voices and actions of formerly enslaved Black people and lesser-known abolitionists,” as Commander writes. Drawn from the archives of the Schomburg Center, a research library in Harlem, the narratives paint a clear, painful picture of the slave experience and the work that eventually ended the barbaric practice. In a starred review, our critic writes, “as comprehensive a collection as now exists and one that should be required reading in history and literature courses.” African American studies professors, take note.

Economy Hall: The Hidden History of a Free Black Brotherhood by Fatima Shaik (The Historic New Orleans Collection, Feb. 25): In a remarkable feat of historical excavation, Shaik pulls back the curtain to reveal the fascinating story of the Société d’Economie et d’Assistance Mutuelle. “Born in 19th-century New Orleans,” writes our critic in a starred review, the organization “was dedicated to benevolent causes of tremendous political implication, including the right of education and the franchise.” Though the failures of Reconstruction dampened the group’s potency, “it carried on to make significant contributions, including giving a young musician named Louis Armstrong a start.” Shaik’s scholarly digging results in “a lively, readable story that nicely complicates the view of racial and ethnic relations in the South of old.”

The Black Church: This Is Our Story, This Is Our Song by Henry Louis Gates Jr. (Knopf, Feb. 16): Gates does it again, following the outstanding Stony the Road with this indelible history of the Black church, arguably the most influential institution in the Black community. In a starred review, our critic writes, “Through meticulous research and interviews with scholars as well as ‘believers, nonbelievers, musical artists, [and] pastoral leaders,’ Gates paints a compelling portrait of the church as a source of ‘unfathomable resiliency’ for Black ancestors as well as the birthplace of so many distinctly African American aesthetic forms.” Ever the incisive critic, Gates is unafraid to point out the failings of the church, especially its treatment of women and the LGBTQ+ community. For the most part, though, the book is uplifting and consistently informative: “Powerful, poignant, and ultimately celebratory. Let the church say, ‘Amen!’ ”