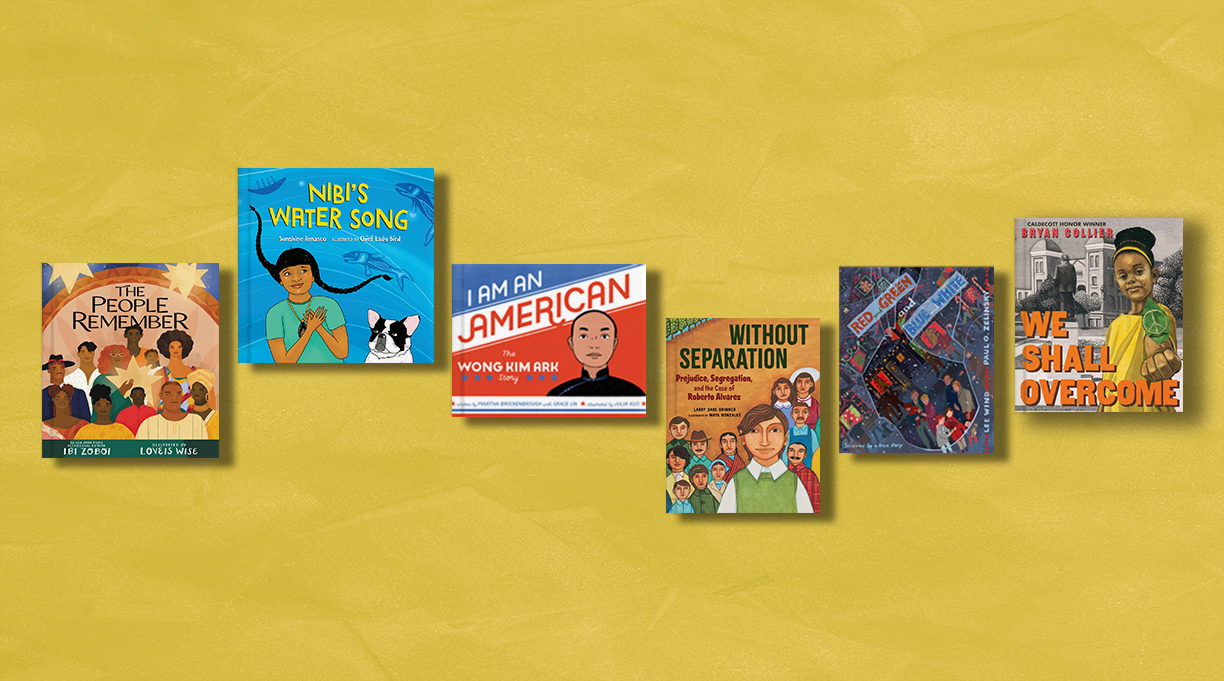 A picture book is, generally speaking, not a speedy thing. Even the sparest text needs revision, and pictures take time—not only to create (picture-book art needs revision just as much as text does) but also to schedule. So, for the most part, the picture books we are seeing this fall began, probably, two to three years ago. When they were conceptualized, their creators probably did not know (though some may have suspected) that they would be landing in a United States in which the teaching of history and current events would be under legislative assault. But they are, and whether intended or not, many of them are perfect for just this moment.

Ibi Zoboi and Loveis Wise bring readers the The People Remember (Baltzer + Bray/HarperCollins, Sept. 28), chronicling the abduction of Africans from their homelands, the Middle Passage, 250 years of enslavement, 100 years of Jim Crow, and the work yet unfinished. With a rhythmic, poetic storyteller’s voice, Zoboi relates the history without flinching, while Wise creates startling compositions that emphasize African American resilience. This call to memory and to action is urgently necessary.

Martha Brockenbrough, Grace Lin, and Julia Kuo plumb legal history, bringing to light the story of Wong Kim Ark in I Am an American (Little, Brown, Nov. 2). Born in San Francisco to immigrant parents, Wong was unjustly detained when returning to the U.S. after a trip to China. His case made its way to the Supreme Court, and the court’s 1898 decision upheld birthright citizenship as established in the 14th Amendment. A simple narrative is buttressed by backmatter that fills in legal and historical context, but the principle is clear throughout.

In Without Separation (Calkins Creek/Boyds Mills, Sept. 14), Larry Dean Brimner and Maya Gonzales also revisit court records, revealing to readers young and old the little-known story of 75 Mexican American students who were expelled from their California school at the beginning of the Great Depression to make way for an all-White student body. One brave 12-year-old named Roberto Alvarez spoke for his community before the California Superior Court, winning their right to attend the school and establishing crucial precedent.

Lee Wind and Paul O. Zelinsky visit more-recent history in Red and Green and Blue and White (Levine Querido, Oct. 19), inspired by an incident in Billings, Montana, in 1993. The pre-holiday peace of a neighborhood decorated for Christmas is shattered when the one house strung about with blue and white lights for Hanukkah comes under antisemitic assault. In a powerful example of acting locally, non-Jewish citizens put menorahs in their own windows in response, declaring solidarity with their neighbors.

With Nibi’s Water Song (Lee and Low, Oct. 12), Sunshine Tenasco (Anishinabe) and Chief Lady Bird (Chippewa and Potawatomi) highlight the environmental injustice so many Native Americans and First Nations people live with every day. With no clean water in her own home, the Indigenous protagonist goes to a neighboring town, knocking on doors of “big, shiny houses” in hopes of clean water, ultimately organizing a protest and demanding the inhabitants of those houses listen and act. Deceptively lighthearted, this book goes deep.

Like Zoboi and Wise, Bryan Collier celebrates Black history in his illustrations of the civil rights anthem We Shall Overcome (Orchard/Scholastic, Nov. 2). Readers follow a smiling Black child in sunny yellow T-shirt walking past the 16th Street Baptist Church, riding a bus with Rosa Parks, looking at Little Rock’s Central High School, all on the way to participate in a community art project bounded by a giant, yellow BLACK LIVES MATTER painted on the pavement.

Here’s hoping that “someday” is soon—these books will help to take us there.